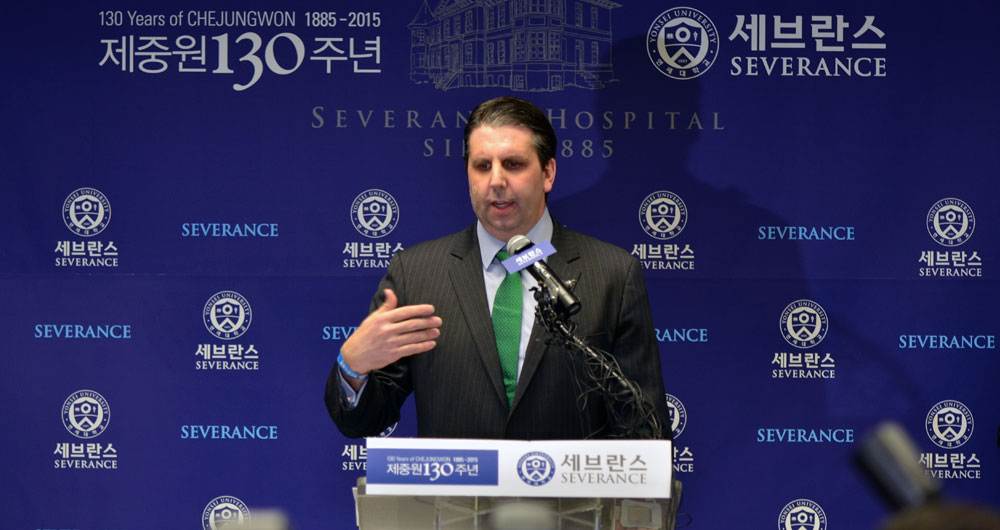 Let me make a few brief comments and then I’ll take a couple of questions.  First, I am happy to report that my family and I are doing well. Thanks in large measure to the extraordinary care I received these last few days, I expect to be able to return to work very soon and to eventually make a full recovery. I want to express my profound gratitude to those — Koreans and Americans alike — who so bravely and selflessly responded to the scene of the attack, and to the medical teams that delivered world-class treatment at both Gangbuk Samsung Hospital led by Dr. Shin and here at Yonsei University’s Severance Hospital led by President Jeong and Dr. Jeong.

I wish I had time today to single out everyone individually, but please know that you will always have my greatest respect and lasting appreciation.  On the U.S. side, I am grateful for all the calls of support shown to me, to include the President, the Vice President, the Secretary of State, a bipartisan group of Members of Congress, fellow diplomats, uniformed military leaders, old friends, and of course our tremendous teams here at the Embassy and USFK.

Let me also underscore just how deeply moved Robyn and I were by the warm and generous sentiments that we heard directly from the people across my home country, the United States of America.  Here in Seoul, I also want to say how deeply moved Robyn and I have been by the outpouring of support from Koreans from all walks of life.  President Park called me during her trip to the Middle East and visited me as soon as she returned. I also am thankful to the Prime Minister, the leaders of the two major political parties, Mr. Kim and Mr. Moon, as well as many other Korean officials and Members of both the leading parties in the National Assembly — for their support and for visiting me here in the hospital.

It has been incredibly gratifying for me and my family to see such beautiful expressions of empathy and generosity from the Korean people. The signs, offers of food, flowers, cards, and the well-wishers on Twitter, Facebook and our blog – these and other acts of kindness have touched us deeply.  This warmth has been on display for all to see for the last few days, and Robyn and I will never, never forget that you came to support us during this time of need.

The bottom line is that this incident has only strengthened our love and affection for this country – and our belief in the unbreakable bond that exists between the United States and the Republic of Korea.

Since arriving here in Seoul last fall, Robyn, Sejun, Grigsby and I have felt embraced and welcomed by the Korean people. In return, we have made it our mission to be open and friendly. And, that will not change.  I will still be a “dongne ajosshi(동네 아저씨)” and “Sejunii appa(세준이 아빠)” — as people here in Korea have called me.

Our purpose and resolve behind our bilateral relationship is also something that will not change—in fact, as I see it, and it has been my mission from my first day here in Seoul, and that of my predecessors who have come before me, we will continue our work to grow this relationship not only in terms of our critical military alliance but also in our vibrant economic ties, important diplomatic partnership, and the deep friendship between the Korean and American people.  I am eager to get back to working on this strong and dynamic relationship and I will do so now with even more purpose and enthusiasm.