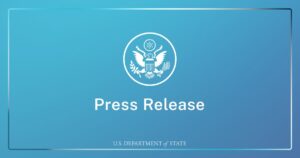 READOUT
OFFICE OF THE SPOKESPERSON
JANUARY 17, 2022

Special Representative Kim expressed concern about the DPRK’s missile launches, which violated multiple UN Security Council resolutions and were the latest in a series of ballistic missile launches by the DPRK this month. He called on the DPRK to cease its unlawful and destabilizing activities and instead engage in dialogue, underscoring the United States’ continued openness to meeting the DPRK without preconditions. The three officials committed to continue their close coordination.