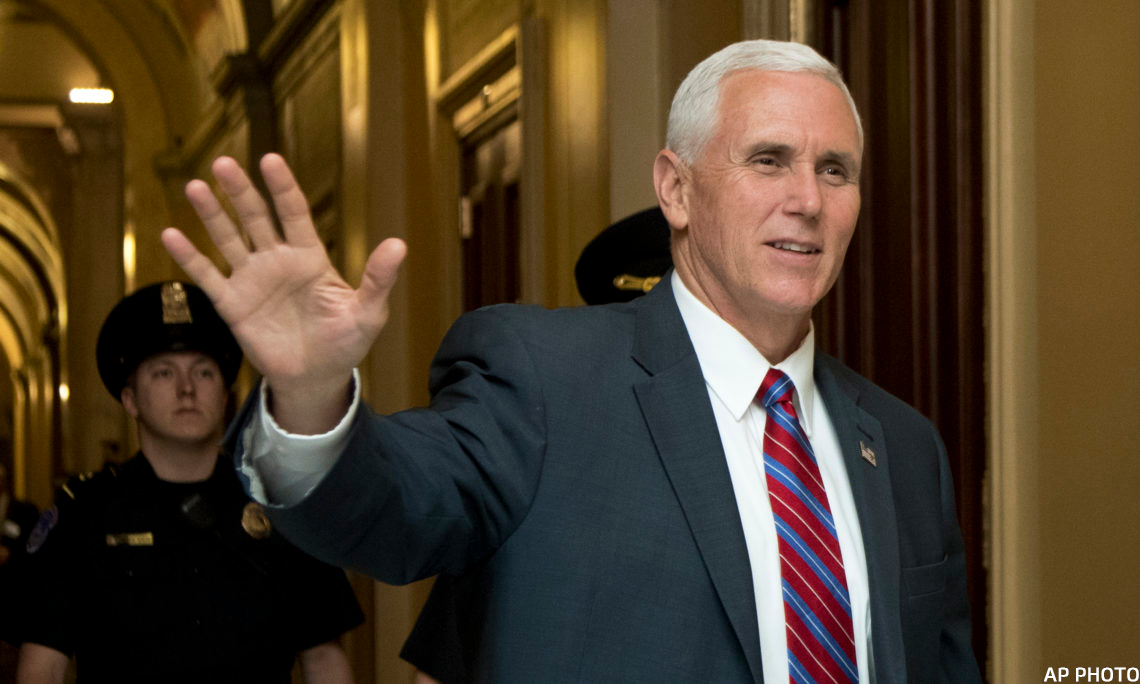 Vice President Mike Pence waves as he walks past reporters in a U.S. Capitol hallway in Washington, Monday, May 1, 2017. (AP Photo/Manuel Balce Ceneta)

And we are so proud of this Cabinet, and I am so grateful — Secretary Alex Acosta, thank you for that kind introduction.  Would you all join me in giving a vigorous round of applause to the new Secretary of Labor for the United States of America?  (Applause.)  And, Jovita Carranza, thank you for being here, and congratulations on your nomination to become the next Treasurer of the United States of America.  (Applause.)  And, Ambassador Gutiérrez, who changed his travel plans to be here with us today, it is a privilege to have you here.  We are honored by your presence.  Thank you for all that you do to build a stronger relationship between the United States and Mexico.  We are truly grateful.  (Applause.)

And thanks to all the Hispanic leaders from the life of business, from the life of faith, from public life who are here with us today, especially let me thank Mario Rodriguez and the members of the President’s National Hispanic Advisory Council, and our sponsor, the Hispanic 100 for putting on this great, great celebration on the eve of Cinco de Mayo.  (Applause.)

It really is an honor to me to be with you today.  The President personally asked me to join you today as we celebrate this important moment in the life of this nation and in the history of so many Americans.  But let me also say it’s a particular joy to be here tonight with my much, much, much better half — my wife of 31 years, Karen Pence.  Would you join me in welcoming her tonight?  (Applause.)

The President asked me to be here today to help all of you commemorate a day defined by courage and sacrifice in the defense of freedom.  One-hundred and fifty-five years ago tomorrow, in the Battle of Puebla, the Mexican Army won a historic victory of freedom against the invading French.  Despite being outnumbered two to one, the bravery and valor of the Mexican people that day won has been an inspiration ever since, and their heroism has won the hearts of the people not only in Mexico, but across America.

Cinco de Mayo has become a day to celebrate the extraordinary contributions that Mexican Americans — and, really, all Hispanic Americans — have made and continue to make in the United States of America.  Today, millions of Americans can trace their heritage back to Mexico, from past generations we celebrate their many contributions to the life of this nation.  From the arts to the armed forces, from the sciences to sports, Mexican Americans have made a lasting impact on our nation — and on our history books, and filled those history books with names of trailblazers.

I really think today — the President and I both do — of all Hispanic Americans and Mexican Americans who, every day for generations, have contributed to this nation, who have raised families, who have built communities, started businesses, added their voices and talents to making America great.  Economically, culturally, in our churches, our towns and cities across this country, the truth is that Mexican Americans and Hispanic Americans as a whole make a difference in America every single day.  And that really is what we celebrate in Cinco de Mayo.

We think of the extraordinary number of Hispanic-owned businesses, which actually grew by more than 50 percent over the past decade, and nearly half of all the Latino-owned firms are owned by people of Mexican heritage.  And Latina-owned small businesses are the fastest-growing business sector in the United States of America.  (Applause.)

And for more than 150 years, Hispanic Americans have served with distinction in every branch of the Armed Forces of the United States of America.  And we honor their service now.  (Applause.)

The Regiment in the Civil War, from the Arizona National Guard’s 158th Infantry Regiment in World War II — which General Douglas MacArthur called “one of the greatest fighting combat teams ever deployed for battle” — Hispanics have a long and proud history of putting on the uniform to defend our freedom and our very way of life.  And over 250,000 Latinos are serving in the Army, the Navy, the Air Force, the Marines, the Coast Guard, and our Reserves at this very moment.

Folks, the Mexican American — and all Hispanic American — communities are one of the most vibrant threads in our national fabric.  Their success — your success is America’s success.  And that’s why President Donald Trump is fighting every day to empower Hispanic Americans to contribute even more to our country’s future.

The President has made the Latino community a priority and we always will.  We’ve been participating already with the Latino Coalition, the U.S. Hispanic Chamber of Commerce in conferences and listening sessions, with business owners, parents, teachers, healthcare workers.  The President has made a point as we’ve had listening sessions one after another at the White House, to ensure that we’re hearing from the Hispanic community in America as well.

In fact, you saw the President’s leadership on full display this last week.  Thanks to President Donald Trump, what you saw pass in the House of Representatives today is the beginning of the end of Obamacare.  (Applause.)  Just a few short hours ago, with strong support in the U.S. House of Representatives, we took an important step to repeal and replace Obamacare, and replace it finally with the kind of healthcare reform that every American deserves.

But it’s not just health care.  President Trump’s agenda also includes taxes, and regulation, and energy.  The President is absolutely determined to ensure that, as we go forward in this country, we promote policies that will create jobs and opportunity for every American, including Hispanic Americans.  In fact, the President is preparing right now, after we move forward in the Congress with healthcare reform, this President is going to pass the largest tax cut in American history.  (Applause.)

All these issues we know are very important to the Latino community, as they are to every American.  Just yesterday, the President also hosted a group of students from here in Washington, D.C., including many Hispanic children, to celebrate another important step — a step for educational opportunity.  The President this week, in the spending bill — a bill he’ll sign tomorrow — was able to extend the educational voucher program here in our nation’s capital, opening doors of opportunity to disadvantaged children.  (Applause.)

The D.C. Opportunity Scholarship Program really is a case study in school choice success.  When the President signs the renewal into law in the spending bill this week, it will be a victory for families in Washington, D.C.

So as I close, on this eve of Cinco de Mayo, let me just say that, like all of you, I count among the greatest blessings of my life, to simply call myself an American.  And we’re all descended from those who didn’t have that blessing, and strived with all of their might to obtain it.  We are, as the saying goes, with a few exceptions, a nation of immigrants, and that’s as true today as it was at the hour of America’s birth.

In his Joint Address to Congress, President Trump promised to, in his words, “serve, protect, and defend the citizens of the United States,” to “strengthen our nation’s security,” to “restore respect for our laws.”  Our President believes that a system based on the rule of law will benefit every American, including Hispanic Americans through renewed safety and prosperity.  And as President Trump said to Congress, “real and positive immigration reform is possible.”  (Applause.)

And on this eve of Cinco de Mayo, I can assure everyone here that as we move forward, we will, as the President said, in his words, “show great heart” every step of the way.

This is a deeply personal matter for those of you in this room, and it’s also a deeply personal matter for me.  You know, it was nearly a century ago that my great-grandmother, as the story goes in our family, handed my grandfather, as a young man, a one-way ticket from Ireland to America.  The legend in our family is that my grandmother walked him up the hill outside that little house in Tubbercurry, Ireland.  She looked across to the west of Ox Mountains, and thought of the Atlantic before them.

And she said, “you have to go to America” because, in his words, “there’s a future there for you.”  You know, Richard Michael Cawley — which happens to be where Michael Richard Pence got his name — stepped ashore on Ellis Island as a young man on April 11, 1923.  He made his way to Chicago, where he drove a bus for 40 years.  He put roots down.  He built a good name, a wonderful family.  He raised a precocious redhead whose blue eyes and red hair still flame to this day.  She married a fast-talking salesman who took her down to southern Indiana, where I showed up.

My grandfather’s story, my mom’s story, and my story is like the stories of so many of you here, and the families that celebrate Cinco de Mayo this week.  It’s really the story of the American Dream.  My grandfather was an Irishman by birth, but he became an American by choice, and was proud of it.  And when he went home to be with the Lord, in 1980, he left behind a family and a grandson who will forever be grateful for his courage and his willingness to come.

It was Inauguration Day — just seems like a few short months ago.  And I thought a lot about my grandfather.  I was thinking, as I prepared to take that oath of office as the 48th Vice President of the United States, what my grandfather must have thought.  And I was sure of just two things.  Number one, he knew me well, so I’m sure he was very surprised.  (Laughter.)  And secondly, I just know, looking down from glory, that immigrant grandfather of mine knew that he was right.  He was right about America.  That is, this is a land of opportunity freedom, where anybody can anybody.

You know, it’s the greatest privilege of my life to serve as Vice President to a President who, each and every day, is working his heart out to renew the American Dream and the opportunity to live that dream for everyone in this country.  And today I say with confidence that the future is bright — brighter than ever before — for Hispanic Americans and Americans of every background.  And with Donald Trump in the White House, and with your help and God’s help, I know the best days for the greatest nation on Earth are yet to come.

So thank you for coming today, and happy Cinco de Mayo.  (Applause.)