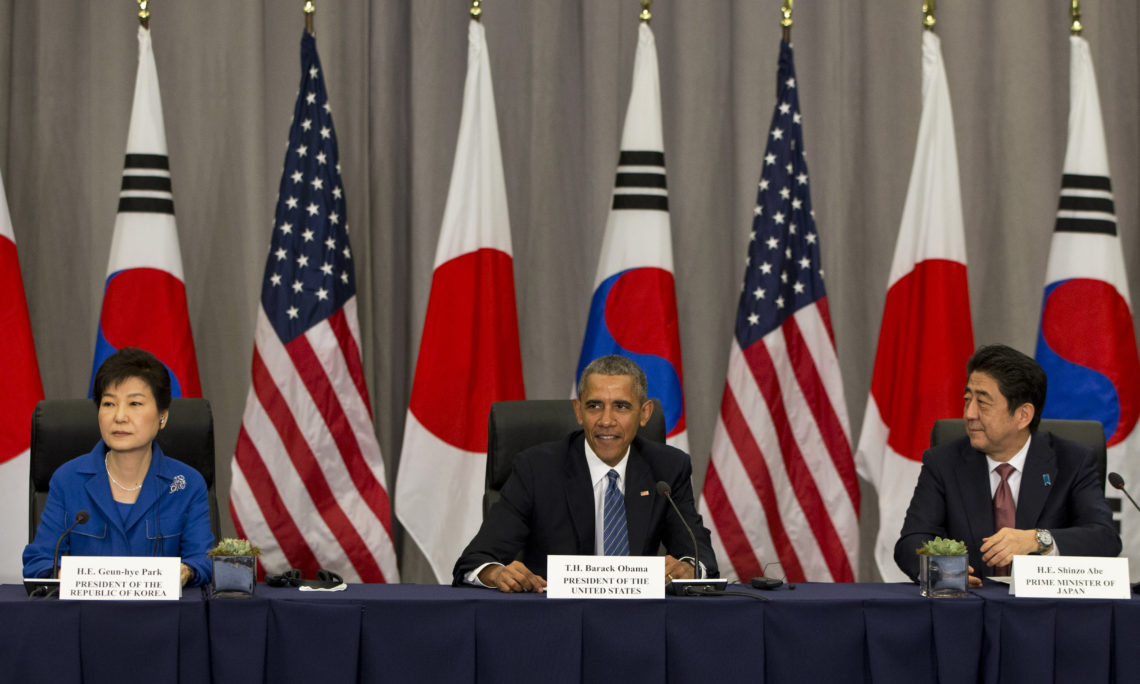 PRESIDENT OBAMA:  Well, it is a pleasure to host President Park of the Republic of Korea and Prime Minister Abe of Japan, two of our closest allies in Asia, two of my closest friends and collaborators on the international stage.  We are bound together by treaty, by trade, and by the enduring bonds between our peoples.

We share common values and a common vision for the future of the Asia Pacific — a vision that is rooted in our strong commitment to a rules-based order, one in which all countries, regardless of size, act according to shared norms and shared principles.

Because of the topic of this summit, the Nuclear Security Summit, it’s not surprising that one of the topics most on our minds is the issue of North Korea.  And we are united in our efforts to deter and defend against North Korean provocations.  We recognize that our security is linked, that we have to work together to meet this challenge.  And we also recognize that it is important to the entire international community to vigilantly enforce the strong U.N. security measures that were passed in light of some of the ballistic missile and nuclear activity that Pyongyang has been engaging in.

We agreed during this meeting that trilateral security cooperation is essential to maintaining peace and stability in Northeast Asia, deterring the North Korean nuclear threat and the potential of nuclear proliferation as a consequence of North Korean activities.  And in our meeting, we discussed ways to deepen that cooperation.  We’ve directed our teams to work diligently in the coming weeks and months to elaborate additional steps that we can take collectively in order to ensure that we have a denuclearized Korean Peninsula and that we can restore a sense of stability and peace to the region, as well as hopefully promoting the kind of opportunities and prosperity for the North Korean people who have been suffering so severely because of human rights abuses in North Korea.

We also had a broader discussion about global challenges.  We shared our commitment to moving forward on the Paris agreement, around climate change.  We are committed to working together on combatting ISIL.  And at the end of this Nuclear Security Summit, there’s going to be an international focus on what additional steps need to be taken in light of the terrible tragedy that took place in Brussels.  Both the Republic of Korea and Japan have been stalwart allies in that process.

And finally, we talked about some potential areas of collaboration between our three countries on more positive agenda items, such as the Vice President’s moonshot to cure cancer.  There’s already collaboration between Japan and the Republic of Korea on cancer research.  We’re going to be directing our teams to work together in a trilateral fashion to make further strides in this critical area.

So I want to thank both President Park and Prime Minister Abe for their outstanding work with us, their significant progress in their bilateral relationship, and our shared commitment to promoting a more peaceful world.

With that, let me turn it over to President Park of the Republic of Korea.

PRESIDENT PARK:  Today’s trilateral summit meeting with President Obama and Prime Minister Abe, following as it does our previous meeting at The Hague in 2014, is indeed a special occasion.  In light of the security situation on the Korean Peninsula and in Northeast Asia in the wake of North Korea’s fourth nuclear test, just the mere fact that we three leaders have gathered in one spot in and of itself carries huge significance.

First of all, on the North Korean nuclear issue, which represents a shared challenge confronting all three countries — an urgent challenge — today’s meeting has led to in-depth discussions on what our three countries should do together in order to stop North Korea from upgrading its nuclear capabilities and alter its misguided calculus.  And we further reinforced our coordination towards North Korea.

Given the adoption of Security Council Resolution 2270, which is the strongest sanctions resolution on North Korea to date, what is essential going forward is to thoroughly enforce the resolution so that North Korea realizes it cannot ensure its own survivability unless it abandons its nuclear aspirations.  To this end, Korea, the U.S. and Japan have agreed to coordinate closely not only in enforcing the Security Council resolution, but in implementing our respective individual sanctions on North Korea, all the while further enhancing our solidarity with the international community to make sure that the international community effectively steps up its pressure on North Korea.

In addition, in relation to the recent escalation of North Korea’s rhetoric about making further provocations, I stand here together with the leaders of the United States and Japan, and warn once again that the international community will by no means condone North Korea’s provocation, and that should it choose to undertake yet another provocation, it is certain to find itself facing even tougher sanctions and isolation.

In addition, I hope that our trilateral cooperation can set the pace for working together with a wide range of countries in the region, and thereby continue to serve the cause of peace and prosperity in the Asia Pacific.

Aside from the North Korean nuclear issue, we also agreed at today’s meeting to redouble our cooperation on global issues, including climate change, counterterrorism and health.  In particular, having hosted the second Nuclear Security Summit after the United States hosted the first, Korea intends to make leading contributions to moving the nuclear security regime further forward as we enter the post-summit phase.

President Obama just spoke about the cancer moonshot initiative.  We couldn’t agree more about the importance of curing cancer and what it can do to promote public health and welfare.  And we welcome this path-breaking initiative by the United States.  We look forward to expanding trilateral cooperation in this area as we go forward.

I hope that today’s summit meeting will lay the groundwork for enhanced coordination among countries in the region in the service of peace and stability on the Korean Peninsula and in Northeast Asia.  And I take this opportunity to thank President Obama once again for hosting this successful trilateral summit.

PRIME MINISTER ABE:  (As interpreted.)  First of all, my deepest appreciation to President Obama for hosting today’s Japan-U.S.-Korea summit.  I also was very delighted to be able to see President Park Geun-hye once again.

Leaders of three countries that are responsible for regional peace and stability have gotten together at one venue and confirmed the importance of the rule of law and actions based on rules, and exchanged candid views on a variety of regional and global issues, including North Korea.  The meeting was timely and extremely meaningful.

In light of the regional situation faced by the three nations, it is necessary to further promote Japan-U.S.-Korea cooperation in the area of security.  A special concern is the progress of North Korea’s nuclear and missile capability, which is a direct and grave threat not only to the three countries but to the global community.

In order to jointly respond to such circumstances, we confirmed our commitment to strengthen the trilateral cooperation at all levels, which was the major achievement of this meeting.  We agreed to give direction to the working level to promote concrete security and defense cooperation between the foreign affairs and defense authorities of the three nations.

Further, in order for the global community to steadfastly implement the Security Council resolutions, we hope to proceed with assistance to the peripheral countries and developing countries in capacity-building for nonproliferation.

On the issue of abduction, I spoke of the importance of the abduction issue and that it is a problem that needs to be resolved with certainty.  And I’m most appreciative of the kind understanding and support shown by both Presidents.

In addition to terrorism, Middle East, climate change, elimination of cancer, how we can cooperate, we have touched upon several other items as well.  Throughout these consultations, we confirmed that there will be further collaboration and cooperation between our three nations on global challenges. Based on what we discussed this morning, Japan, the United States, and Korea, who share regional strategic interests, will continue to closely collaborate and cooperation with each other.

Three leaders getting together at one venue and conducting frank exchange of views contributes to the peace and prosperity of the region and to the global community.  Once again, I was reminded of that fact.  And once again, may I extend my deepest gratitude to President Obama for hosting this meeting.