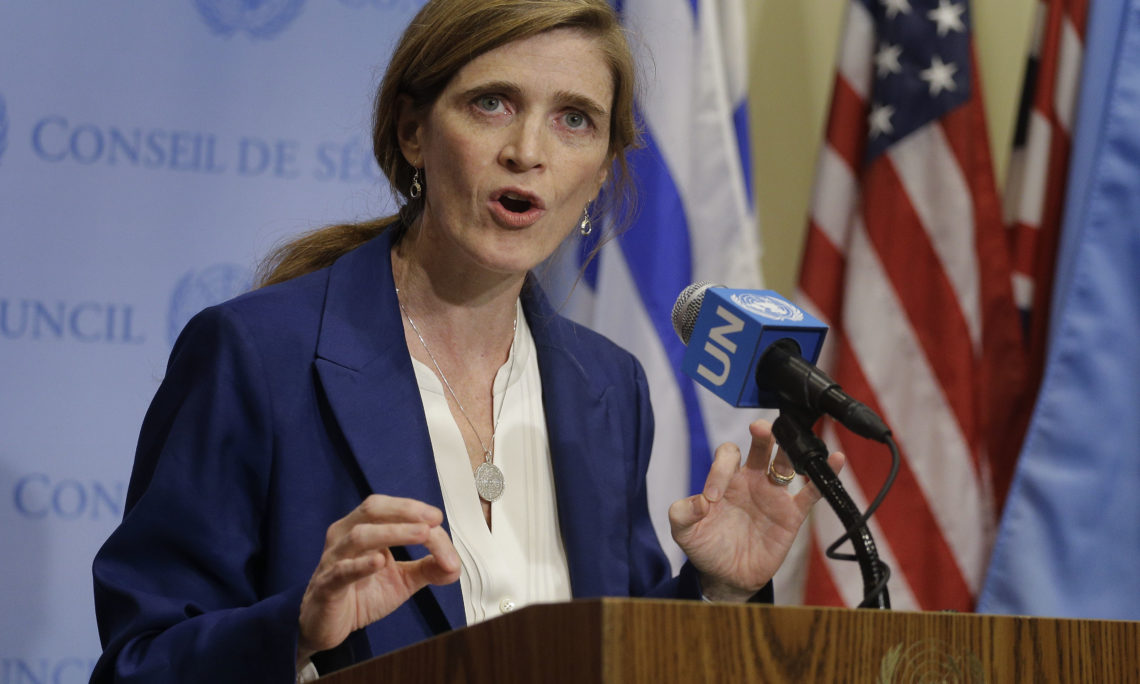 Samantha Power, U.S. Ambassador to the U.N., talks to the media during a break in United Nations Security Council consultations, Thursday, Feb. 25, 2016, at the United Nations. A U.N. resolution proposed against North Korea after its recent nuclear test and rocket launch will affect exchanges with i

Hi, everybody. Today, in response to the DPRK’s recent nuclear test and subsequent proscribed ballistic missile launch, the United States tabled a draft UN Security Council resolution that, if adopted, would break new ground and represent the strongest set of sanctions imposed by the Security Council in more than two decades.

Let me explain some of the resolution’s major provisions. For the first time in history, all cargo going in and out of the DPRK would be subjected to mandatory inspection. For the first time, all small arms and other conventional weapons would be prohibited from being sold to the DPRK. In addition, this resolution would impose financial sanctions targeting DPRK banks and assets, and ban all dual-use nuclear and missile-related items.

Also for the first time, the Security Council would impose sectoral sanctions on the DPRK – limiting, and in some instances banning outright, exports from the DPRK of coal, iron, gold, titanium, and rare earth minerals, and banning the supply to the DPRK of aviation fuel, including – notably – rocket fuel. These measures would also ground DPRK flights suspected of carrying contraband. Suspicious vessels carrying illicit items would be denied access to ports.

These sanctions – if adopted – would send an unambiguous and unyielding message to the DPRK regime: the world will not accept your proliferation; there will be consequences for your actions, and we will work relentlessly and collectively to stop your nuclear program.

If adopted and implemented fully, these sanctions would constitute a major increase in pressure compared to the Council’s previous actions on DPRK. They have broader scope and target more of the DPRK’s pressure points. They also have unprecedented interdiction provisions to make sure that the other provisions get enforced – most notable among them, this mandatory inspection of cargo to and from the DPRK.

In addition, these sanctions would make it much harder for the DPRK to raise the funds, import the technology, and acquire the know-how to advance its illicit nuclear and ballistic missile programs.

So long as North Korea continues to undermine international security through its dangerous pursuit of nuclear weapons, the United States and our partners will pursue rigorous and unyielding sanctions to impede their ability to endanger our shared security and to hold them accountable for their actions. We remain clear-eyed about the prospects of an immediate change in DPRK’s behavior, but we have seen how robust sanctions can alter a government’s dangerous nuclear ambitions in other contexts. The time to use this tool with the DPRK is now, and we look forward to working with the Council to put in place comprehensive, robust, and unprecedented sanctions against the DPRK regime.

With that, I’ll take a couple questions. Thank you. No

QUESTION: Thank you, Madam Ambassador. China has raised the question all the time that these kind of sanctions might end up with a lot of suffering for the people in North Korea. What are you going to do to just avoid that kind of back draw? And from this preliminary discussions in the Council, do you feel that you can vote on this draft soon? When?

AMBASSADOR POWER: We are hoping to have a vote in the very, very, very near future. It has been seven weeks since the original nuclear test by North Korea and we used each of the days in that seven weeks constructively – as I think you all will see when you see the text of the resolution. But it’s long past time to establish accountability and these measures, again, in addition to over time changing the calculus of people in the regime, are going themselves to impede the ability of the North Korean regime to get access to funds, to get access to technology, to get access to nuclear know-how. So we really need to move swiftly, again, given what we have seen North Korea do over time.

I think the concern that you raise, and that we share about the welfare of the North Korean people, our concern is reflected in the fact that we’ve had two Security Council sessions dedicated to human rights in North Korea. Our concern is reflected in the provisions in the text that make clear in a number of places exceptions for livelihood. So there are a number of areas in which we made a judgement together, again with colleagues on the Council, that it was important to put in there that there needed to be a nexus with the nuclear and the ballistic missile program.

Now it’s a balance because what we’ve seen is North Korea making arguments about how it’s importing things for the sake of the people and then diverting funds, and technology, and everything toward its nuclear and ballistic missile program. So my impression from the session we just came from is that Council members seem broadly of the view that that balance had been struck, and I should say the text of the resolution itself speaks of the grave hardship that the people of North Korea are being subjected to. So even the resolution itself speaks to, again, the devastation that North Koreans live with – ordinary North Koreans live with every day.