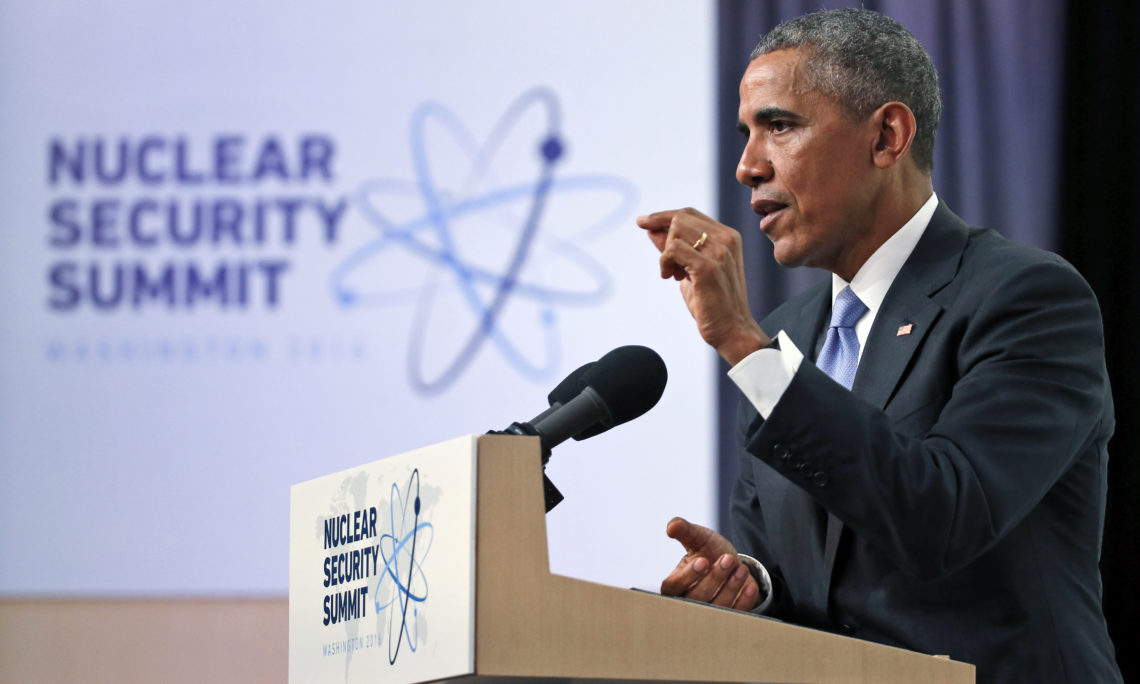 The threat of nuclear and radiological terrorism remains one of the greatest challenges to international security, and the threat is constantly evolving.  We, the leaders, gathered in Washington, D.C. on the first day of April, 2016 on the occasion of the fourth Nuclear Security Summit, are proud to observe that the Summits have since 2010 raised awareness of this threat and driven many tangible, meaningful and lasting improvements in nuclear security.  The Summits have also strengthened the nuclear security architecture at national, regional and global levels, including through broadened ratification and implementation of international legal instruments regarding nuclear security.  We underline the importance of the Convention on Physical Protection of Nuclear Material and its 2005 Amendment and the International Convention on the Suppression of Acts of Nuclear Terrorism and will continue to work toward their universalization and full implementation.  We welcome the imminent entry into force of the 2005 Amendment to the Convention on Physical Protection of Nuclear Material and Facilities and encourage further ratifications.

We reaffirm our commitment to our shared goals of nuclear disarmament, nuclear non-proliferation and peaceful use of nuclear energy.  We also reaffirm that measures to strengthen nuclear security will not hamper the rights of States to develop and use nuclear energy for peaceful purposes.  We reaffirm the fundamental responsibility of States, in accordance with their respective obligations, to maintain at all times effective security of all nuclear and other radioactive material, including nuclear materials used in nuclear weapons, and nuclear facilities under their control.

More work remains to be done to prevent non-state actors from obtaining nuclear and other radioactive materials, which could be used for malicious purposes.  We commit to fostering a peaceful and stable international environment by reducing the threat of nuclear terrorism and strengthening nuclear security.

Sustaining security improvements requires constant vigilance at all levels, and we pledge that our countries will continue to make nuclear security an enduring priority.  We, as leaders, are conscious of our responsibility.  Actions taken today can prevent tomorrow’s nuclear security incidents.  Where we choose to take such steps visibly, in light of national conditions and while protecting sensitive information, we contribute to strengthening and building confidence in the effectiveness of our national nuclear security regimes.

Countering nuclear and radiological terrorism demands international cooperation, including sharing of information in accordance with States’ national laws and procedures.  International cooperation can contribute to a more inclusive, coordinated, sustainable, and robust global nuclear security architecture for the common benefit and security of all.

We seek to maintain the international network of officials and government experts who have supported the Summit process and to incorporate the broader community of States, as well as encourage the continued engagement of relevant partners in nuclear industry and civil society.

In our continued collective determination to ensure political momentum and to continuously strengthen nuclear security at national, regional, and global levels, we resolve to implement the attached Action Plans, in support of the international organizations and initiatives to which we respectively belong (the United Nations, the International Atomic Energy Agency, INTERPOL, the Global Initiative to Combat Nuclear Terrorism, and the Global Partnership Against the Spread of Weapons and Materials of Mass Destruction), to be carried out on a voluntary basis and consistent with national laws and respective international obligations.  These plans reflect the political will of participating States.

The 2016 Summit marks the end of the Nuclear Security Summit process in this format.  We affirm that the Communiqués from the 2010, 2012 and 2014 Summits and the Work Plan of the 2010 Summit will continue to guide our efforts as we endeavor to fully implement them.