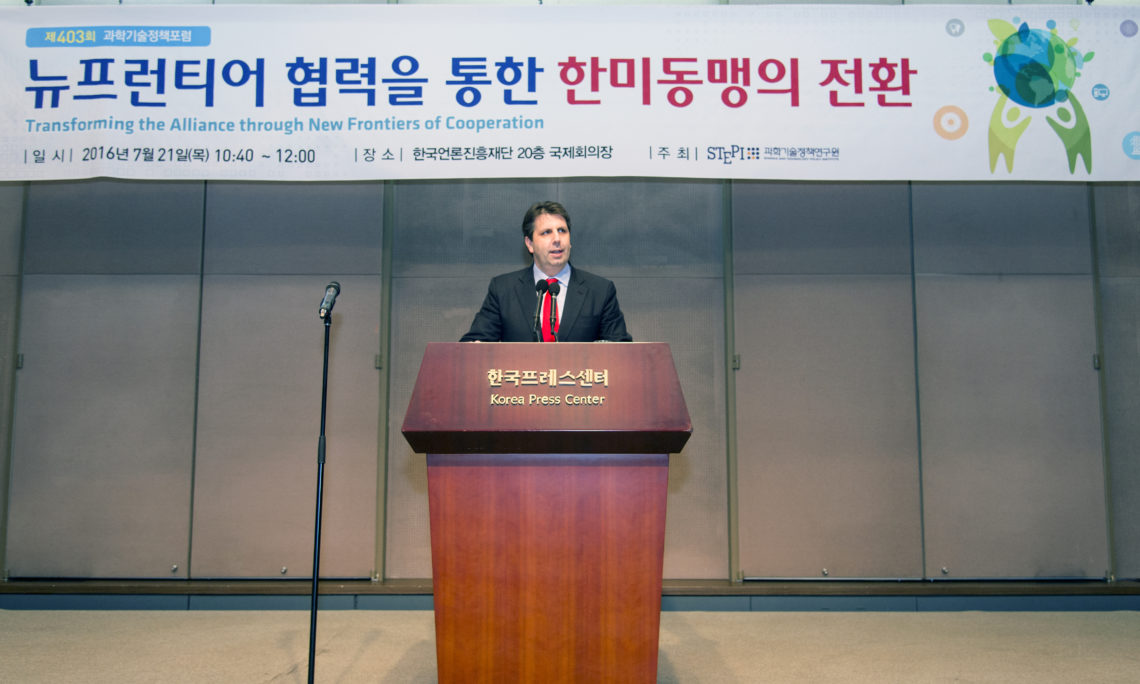 Thank you, President Song (STEPI), Assistant Minister Min (MSIP), and Dr. Ahn (STEPI moderator) for your welcome and kind introduction.  To the distinguished guests and members of the press who have joined us today, thank you and good morning.

It is a pleasure to be here today on the occasion of the 403rd STEPI Forum to share my thoughts on an exciting, dynamic, and vital element of the United States-Republic of Korea relationship.

The Ministry of Science, ICT, and Future Planning and the Science and Technology Policy Institute are the perfect hosts for this event.  They have helped lead the way on this new, broader collaboration.

Ladies and gentlemen, in October 2015 our nations’ two leaders held a summit in Washington.  During this important meeting, they resolved that the “New Frontiers” of cooperation – space, cyber, health, energy, and the environment –would play a central, pivotal role in our bilateral relationship.

I am here this morning to talk about these New Frontiers and how we are moving our alliance into important and strategic new directions.

These challenges and opportunities cannot be resolved or harnessed by a single nation.  They recognize no borders and require deep cooperation and collaboration.

Our work on these issues not only brings benefits to our bilateral relationship.  It helps the Asia-Pacific region, and it promotes peace and prosperity throughout the world.

Beyond this, there is a compelling rationale for why this cooperation makes great sense for our two nations – and why our two leaders have placed such emphasis on these focus areas.

First, through these New Frontiers of cooperation, we are building upon our alliance at its strongest and most effective moment in modern history.  By doing so, we are able to capitalize on the deep foundation of trust, cooperation, and complex problem solving already at work within the relationship.  In short, launching the New Frontiers takes advantage of the strong momentum and bandwidth in the alliance.  Moreover, public opinion polls clearly show that both the American and the Korean people deeply support the U.S.-ROK relationship – and are sending us a signal that we should be working to expand and enhance the relationship in creative, dynamic ways.

Second, these five key New Frontiers are areas in which we have already done very good work in the past.  They are areas in which we have deep expertise within our governments, industries, research communities, and other parts of civil society.  In other words, just as there is a strong deep foundation of trust, cooperation, and complex problem solving – there is also a strong technical foundation of expertise on which to expand.

Third, these new areas of cooperation help to empower and draw new constituencies into our bilateral relationship.  As a result, the future of our relationship will be increasingly pioneered by scientists, doctors, engineers, entrepreneurs, and civic-minded leaders – often by young people – who may not have otherwise brought their talents to the Alliance but have the skills to help craft a secure and prosperous global community.

Fourth, focusing on these sectors has the potential to unleash strong economic benefits – creating high-paying, high-skilled jobs both here in South Korea and in the United States.  Our cooperation in some of these areas has already inspired the private sector to get more involved.  Our policies are sending market signals to businesses, which are pursuing commercial opportunities to implement our plans.

Fifth and finally, these collaborative, cooperative efforts build strong people-to-people, industry-to-industry, and government-to-government ties.  Through these efforts, we further reinforce and further strengthen an already vibrant and growing alliance.

To be sure, there is a clear and compelling policy rationale for the New Frontiers.

And, our Presidents are offering strong leadership and political support for these initiatives.

But, what is, perhaps, most important is that the New Frontiers is not just talk, not just rhetoric.  Through these new initiatives, we are already delivering results.

Accordingly, I would next like to take a few minutes to briefly go through each of these five areas of cooperation, providing a more systematic look at where we are today.

Space: A New Frontier in Every Sense of the Word

Let me start with space.  Space exploration is important to the future of the world, and important to Korea’s economy.  It brings about new technology, promotes the study of science and technology, creates jobs, and enhances security.  To quote President Obama, “No longer is space just a destination to reach; it is a place where we must be able to work in ways that are responsible, sustainable, and safe.  And it is central to our security and the security of our allies.”

And perhaps most important of all, space exploration inspires people young and old, captures the imagination, and often calls people to explore the universe in which we live.

We have seen steady and sustained progress in bilateral space cooperation.  Here are a few examples:

Going forward, there are almost endless possibilities for future cooperation.  NASA has set a course for Mars.  The Republic of Korea and the United States have already pledged that we will develop the scientific and technological research to get to the Red Planet.

South Korea has launched its own space missions, including the development of a lunar orbiter and lunar lander.  The United States has already committed to cooperation on the lunar orbiter.  And, our two space agencies are also undertaking and exploring a range of other projects designed to deepen and enhance our cooperation for decades to come.

Cyber: A Natural Extension of Cooperation in Security and Trade

Let me now turn to cyber.  Just as the future is bright with respect to space, cyberspace is another area where our two governments, our industries, and our peoples are hard at work driving dynamic change.

Time is short and the stakes are high to get it right.  In 2013 and 2014, South Korea suffered several cyber attacks on critical infrastructure, including television stations, banks, and the nuclear power plant operator.  In the United States, we have witnessed attacks against major U.S. corporations, including Apple and Google, and even the U.S. government, resulting in the theft of sensitive personnel information from the Office of Personnel Management.

The United States is committed to working internationally to promote an open, secure, and reliable information infrastructure that supports trade and commerce, strengthens international security, and fosters free expression and innovation.

The United States and the Republic of Korea both recognize that to achieve this goal, we must build and sustain an environment in which norms of responsible behavior guide states’ actions, sustain partnerships, and support the rule of law in cyberspace.

To that end, our two countries are working together to address this shared concern:

In short, through the New Frontiers initiative, we have seen a significant deepening of the cyberspace relationship, and both nations have put in place lasting structures and mechanisms – government and commercial – to guide this set of critical relationships going forward.

Public Health: A Global Challenge that Starts at Home

Concerning public health, in this day and age of a global economy where people and goods move quickly across international borders, we are a single airplane trip away from an outbreak of disease or – worse – an epidemic.

It is imperative then that our two countries work together – both bilaterally and multilaterally – to solve common challenges in global health security.

Fortunately, our two countries are off to a strong start.  Let me give you just a few examples:

That is just the beginning.  We also committed to work together under Vice President Biden’s Cancer Moonshot initiative to eliminate cancer as we know it.  We are cooperating in the fight against antimicrobial resistance – the mechanisms by which organisms are able to withstand attack by antimicrobial drugs – which poses a threat to the health, security, and development potential of all nations.   And, this multifaceted, vibrant cooperation has the potential to deliver lasting benefits for generations to come.

Energy: An Opportunity to Last a Lifetime

Our energy cooperation is broad and deep.  But, what is even more exciting is the potential – the potential to do more on traditional sources of energy, nuclear power, and the vast opportunities for green energy initiatives.  We can and will to do much more.  This is precisely why we launched a high-level energy industry working group – which has already met twice – to set the strategic direction, drive cooperation forward, and explore just how far we can go in this field.
Environment: Acting Today to Save Future Generations

Beyond energy there is the environment.  Clean air, clean water, and climate change.  We cannot afford to wait if we want to avoid the terrible consequences of greenhouse gases and global warming.  But even apart from this threat, we need to take the best possible care of our home.  We must work together now to preserve the health of our planet and the life it sustains.  As President Obama said, “Climate change is no longer just about the future that we’re predicting for our children or our grandchildren; it’s about the reality that we’re living with every day, right now.”

That is why the United States and South Korea have embarked on a number of initiatives to improve and protect the environment:

Working together on climate and environmental issues shows how bilateral cooperation can lead to global benefits – our cooperation is strong and almost limitless.  But we have to act now, we have to act decisively.  President Obama often invokes Martin Luther King Jr. on climate change by saying, “There is such a thing as being too late.”

Let me wrap up.  You have just heard about the vibrant, dynamic cooperation between the United States and South Korea that is accelerating under the New Frontiers initiatives.  This gives me great hope, great optimism, and great confidence in this effort and, by extension, in the future of this relationship.

Another reason that I have such confidence in the New Frontiers is less analytical and more personal.

In my visits to all corners of this great country, I have personally met or heard about some of the amazing people already hard at work to make this vision of our two leaders a reality.

I could go on.  There are many more amazing stories to tell.  I could describe the work of 200 Korean postdoctoral fellows who are working at the U.S. National Institutes of Health.  Or, I could talk about the new public health position from the Centers for Disease Control and Prevention that we just established at the Embassy to accelerate this cooperation.

These stories represent just a few of the hundreds – even thousands – of inspiring examples of individuals doing path-breaking work in these fields.

In the interests of time, I will only say that perhaps what’s even more impressive is that this is just the start.  It’s just the tip of the iceberg.  There is more.  The best is yet to come.

In conclusion, I have one last observation to share, about the enduring nature of our cooperation.  We have momentum on our side.  We are working together to make a real difference in our bilateral relationship and in the global community.  And a key feature of this cooperation is that it is enduring.  It will survive.  And it will thrive.

We are transforming our alliance.  Our two countries are building a new paradigm of cooperation.  Our maturing relationship has identified areas where we can and must collaborate to solve the challenges of the 21stcentury.

We are working toward shared economic prosperity, enhanced public health, greater environmental sustainability, and stronger national security.  These New Frontiers of cooperation I have described for you today are my vision for the future direction of our relationship.  We are ready for the challenge, and we look forward to working with each and every one of you to accomplish these goals.