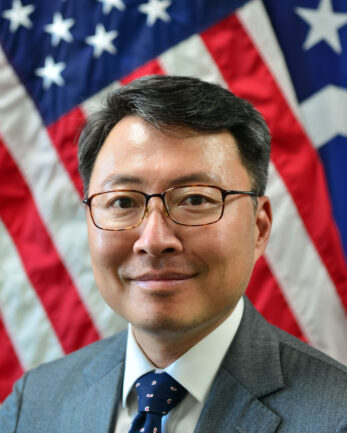 U.S. Consul David J. Jea is the principal officer for Yeongnam and Jeju Island. He previously served in Embassy Seoul as the Trade and Macroeconomic Policy Unit Chief and as Political Internal Unit Chief.

His prior overseas postings with the Department of State include assignments to U.S. Embassies in The Bahamas, Pakistan, and Madagascar. He was also U.S. civilian lead at the Provincial Reconstruction Team in Bamyan, Afghanistan. David is the recipient of numerous U.S. Department of State Superior and Meritorious Honor Awards. He was selected for the University of Denver and Aspen Institute’s ICAP fellowship and the Economic Bureau’s economic training fellowship.

Prior to joining the Foreign Service, David was an international development professional in Central Asia and served as a Peace Corps Volunteer in Russia. He holds degrees from the George Washington University, Florida State University, and the Johns Hopkins School of Advanced International Studies. He speaks Korean, Russian, and French.

David is an avid cyclist, who transferred from Seoul to Busan by bicycle to better understand southeastern Korea, as well as a tennis player and a foodie in training. He is blessed to be married to fellow Foreign Service Officer Dana Marie Jea. Together they are rearing three (mostly) lovely children.