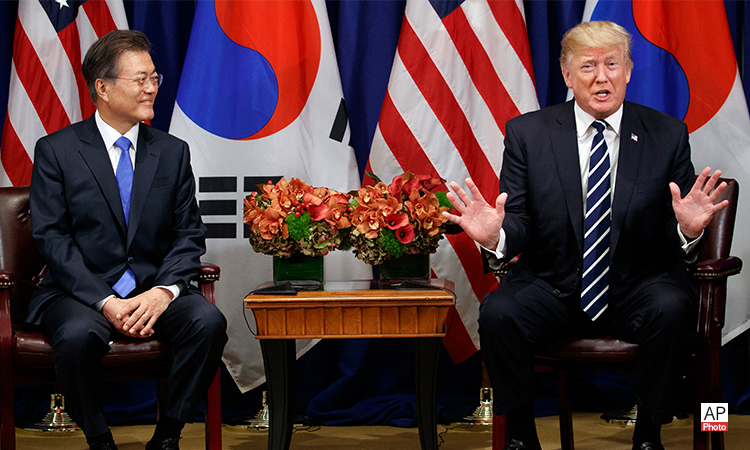 President Donald J. Trump met in New York with President Moon Jae-in of South Korea to discuss the serious and escalating threat posed by North Korea’s nuclear and missile programs. The two presidents condemned in the strongest terms North Korea’s continued provocations, including its sixth nuclear test on September 3 and is two recent launches of ballistic missiles over Japan. The leaders stressed the importance of faithful and thorough implementation of UN Security Council Resolutions 2371 and 2375. The two leaders also agreed that maximum pressure and sanctions on North Korea are necessary to deter its threatening actions and take steps towards denuclearization.

President Trump and President Moon reaffirmed the two countries’ joint goal of pursuing the complete, verifiable, and irreversible denuclearization of North Korea in a peaceful manner. They shared the view that maintaining overwhelming military superiority over North Korea is essential, and committed to maintain and strengthen our robust combined defense posture, including through South Korea’s acquisition and development of highly advanced military assets. They also agreed to the enhanced deployment of U.S. strategic assets in and around South Korea on a rotational basis. The two leaders committed to continue their close consultation when President Trump visits Seoul in November.