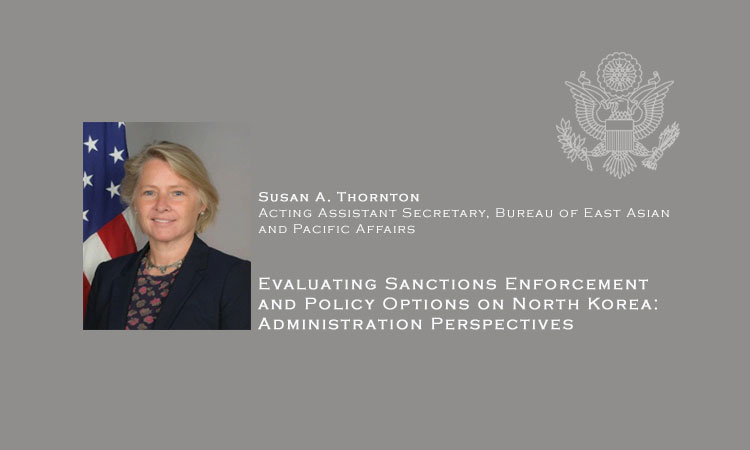 Chairman Crapo, Ranking Member Brown, and Members of the Committee:

Thank you for the opportunity to appear before you today for this timely hearing on North Korea. Thank you also for your attention to the North Korea threat and our active policy response to it.

By now, it should come as no surprise that the Administration recognizes North Korea’s nuclear and ballistic missile program as the paramount security threat facing the United States today. We have been exceedingly vocal in our efforts to compel the Kim Jong-Un regime to adjust its strategic calculus and cease its belligerent pursuit of nuclear weapons. This is for good reason.

Today, we face a North Korea that has demonstrated an unwavering determination to achieve an Intercontinental Ballistic Missile (ICBM) capable of delivering a nuclear payload to our homeland. Each North Korean missile launch and nuclear test furthers Pyongyang’s weapons program. The DPRK’s multiple ballistic missile launches this year – including two inaugural ICBM launches – and its sixth nuclear test earlier this month bring the regime closer to its objective. North Korea continues to make incendiary threats against Guam and our treaty allies the Republic of Korea (ROK or South Korea) and Japan. We take those very seriously. Let me emphasize that we continue to stand with our allies, in particular Japan and South Korea, in the face of this escalating threat, and are fully committed to defending Japan and South Korea with the full range of U.S. military capabilities.

It is clear that we cannot allow such flagrant violations of international law and regional order to continue.

Through clear, decisive actions, we must hold Pyongyang to account.

Our maximum pressure campaign does just that. This strategy employs all available levers of economic and diplomatic pressure on North Korea to make the Kim regime’s adherence to its current behavior politically painful and financially untenable, in order to compel it to revise its strategic calculus.

As an example, last week’s Executive Order greatly broadened our authority to target any foreign financial institutions that facilitate significant transactions in connection with North Korean trade. Among other new authorities, this action puts financial institutions on notice going forward that they can choose to do business with the United States, or with North Korea, but not both. We understand that this action has the potential to make countries, including China and Russia, uneasy, but we view it as the only logical step as we increase pressure on North Korea. We call on all countries to join us in cutting all trade and financial ties with North Korea.

(1) Pressing for strong multilateral sanctions at the UN in response to North Korea’s reckless behavior. Recently, the UN Security Council unanimously adopted the toughest two resolutions ever to target the DPRK. UNSCRs 2371 and 2375 have slashed DPRK exports, including full bans on textiles, coal, iron, and seafood. Cumulative UN sanctions to date will deny the DPRK $2.4 billion in annual trade revenue if properly implemented by all Member States.

(2) Galvanizing international action through diplomatic outreach. Secretary Tillerson has made the DPRK a key issue in every engagement with leaders and ministers around the world. That high-level message from the Secretary is aggressively reinforced by our ambassadors in capitals everywhere and in meetings at every level. In daily diplomatic engagements with partner countries, we press them to cut off the sources of DPRK financial support, interdict WMD and arms-related shipments, and end North Korea’s ability to abuse commercial shipping, banking, and other commercial nodes to violate, evade, and undermine our sanctions. We expect all countries, at a minimum, to fully implement UNSCRs, and we press them to take additional actions measures to put diplomatic and economic pressure on Pyongyang.

(3) Maximizing our domestic authorities – including last week’s Executive Order – to target North Korea’s global proliferation and financial networks through actions focused on individuals and entities that support the regime’s ability to acquire revenue in support of its unlawful weapons and proliferation programs. In close coordination with our counterparts in Treasury, we have sent a clear message across the globe that we will not hesitate to take action where the evidence shows that individuals and entities are enabling the DPRK’s unlawful activities.

Our pressure campaign is aimed at bringing the DPRK back to negotiations on the denuclearization of the DPRK. We also stand ready to respond to any acute threat from the DPRK. We are fully committed to the defense of the United States and our allies, and are ready to respond to any DPRK attack. We have deployed THAAD to the ROK and continue to take other measures to prepare ourselves, South Korea, and Japan to respond to a DPRK attack with force. We are unequivocal in our messaging to North Korea that any attack on the United States or our allies will be met with an overwhelming response.

Throughout the execution of this strategy, we have been clear about what our strategy is not: We are not seeking regime change or collapse. We do not seek an accelerated reunification of Korea, nor an excuse to garrison troops north of the Armistice Agreement’s Military Demarcation Line. We have no desire to inflict harm on the long-suffering North Korean people, whom we view as distinct from the hostile regime in Pyongyang.

We recognize that the success of the pressure strategy will depend on heavy cooperation from international partners, especially Beijing. We are working closely with China to execute this strategy and are clear-eyed in viewing the progress – growing, if uneven – that China has made on this front. We are encouraged by China’s agreement to adopt sanctions of unprecedented strength on North Korea at the United Nations. Our task now is focused on ensuring that these internationally binding obligations are implemented in full; and to convince China’s leaders to more fully exert its still considerable leverage over the Kim regime.

Secretary Tillerson said it best when he called China’s support for the pressure campaign “notable, but uneven,” though we have recently seen Chinese authorities take additional actions. We will work with China and Russia on the threat posed by North Korea and will continue to engage in a dialogue on how to further pressure the DPRK. We have also made clear that if China, Russia, and others do not act, we will use the tools we have at our disposal. While our actions are not meant to target countries other than North Korea, we have consistently told our foreign counterparts that we will continue to act multilaterally and unilaterally to disrupt North Korea’s illicit activities wherever they are located.

While there is more work to do, we have achieved notable results from our maximum pressure campaign to date:

Unfortunately, despite the international community coming together to pressure the DPRK, we have yet to see a notable change in DPRK’s dangerous behavior, or any signs that it is willing or interested in serious talks on denuclearization at this stage. That simply means we must increase the pressure and isolation. If the DPRK indicates an interest in serious engagement, and ends its missile and nuclear tests, we will explore that option, but we will do so with a clear view about the DPRK’s track record of violating the spirit and the letter of negotiated agreements and commitments.

We are sincere in our intent to assist the DPRK government in achieving peace, prosperity, and international acceptance. However, absent a tangible change of intent from Pyongyang, we will continue our full-court press approach to diplomatically and financially isolate the DPRK.

We will continue to make clear to Pyongyang that a better alternative to belligerence, poverty and isolation exists, but that the regime will need to make that choice. We will continue to urge countries around the world to take actions to underscore to the DPRK that its behavior is intolerable, and we will continue to build pressure.

We appreciate the strong interest in this issue from Congress, and we look forward to continuing our cooperation. Thank you for inviting me to testify today. I am pleased to answer any questions you may have.