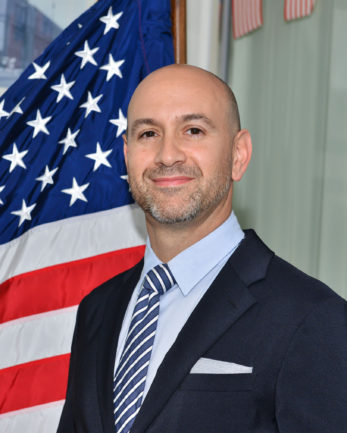 Daniel Gedacht is the Consul and Principal Officer at the U.S. Consulate in Busan, Korea. Daniel joined the Foreign Service in 2004 and most recently served as Visa Chief at the U.S. Embassy in Warsaw, Poland, his second tour in Poland.  He has also served at the U.S. Embassies in the Philippines and Iraq, as well as the U.S. Consulate General in Mumbai, India.  Before joining the Foreign Service, he worked as a financial planner, teacher and translator, author of children’s books, and a TV personality in Korea.

Daniel earned a bachelor’s degree at Clark University, as well as masters degrees at American University and Korea University in Seoul, Korea. He speaks Korean, Polish, Italian, and passable Hebrew.  He is an active CrossFitter and a CrossFit Level 1 trainer, and was a four-year varsity baseball player at Clark University.  Daniel is the proud father of two daughters and twin sons.