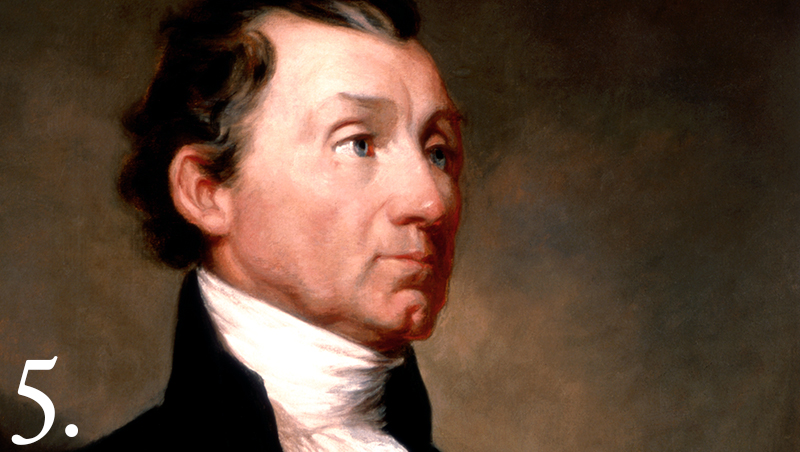 James Monroe was the fifth President of the United States (1817–1825) and the last President from the Founding Fathers.

On New Year’s Day, 1825, at the last of his annual White House receptions, President James Monroe made a pleasing impression upon a Virginia lady who shook his hand:

“He is tall and well formed. His dress plain and in the old style…. His manner was quiet and dignified. From the frank, honest expression of his eye … I think he well deserves the encomium passed upon him by the great Jefferson, who said, ‘Monroe was so honest that if you turned his soul inside out there would not be a spot on it.’ “

Born in Westmoreland County, Virginia, in 1758, Monroe attended the College of William and Mary, fought with distinction in the Continental Army, and practiced law in Fredericksburg, Virginia.

As a youthful politician, he joined the anti-Federalists in the Virginia Convention which ratified the Constitution, and in 1790, an advocate of Jeffersonian policies, was elected United States Senator. As Minister to France in 1794-1796, he displayed strong sympathies for the French cause; later, with Robert R. Livingston, he helped negotiate the Louisiana Purchase.

His ambition and energy, together with the backing of President Madison, made him the Republican choice for the Presidency in 1816. With little Federalist opposition, he easily won re-election in 1820.

Early in his administration, Monroe undertook a goodwill tour. At Boston, his visit was hailed as the beginning of an “Era of Good Feelings.” Unfortunately these “good feelings” did not endure, although Monroe, his popularity undiminished, followed nationalist policies.

Across the facade of nationalism, ugly sectional cracks appeared. A painful economic depression undoubtedly increased the dismay of the people of the Missouri Territory in 1819 when their application for admission to the Union as a slave state failed. An amended bill for gradually eliminating slavery in Missouri precipitated two years of bitter debate in Congress.

The Missouri Compromise bill resolved the struggle, pairing Missouri as a slave state with Maine, a free state, and barring slavery north and west of Missouri forever.

In foreign affairs Monroe proclaimed the fundamental policy that bears his name, responding to the threat that the more conservative governments in Europe might try to aid Spain in winning back her former Latin American colonies. Monroe did not begin formally to recognize the young sister republics until 1822, after ascertaining that Congress would vote appropriations for diplomatic missions. He and Secretary of State John Quincy Adams wished to avoid trouble with Spain until it had ceded the Floridas, as was done in 1821.

Great Britain, with its powerful navy, also opposed reconquest of Latin America and suggested that the United States join in proclaiming “hands off.” Ex-Presidents Jefferson and Madison counseled Monroe to accept the offer, but Secretary Adams advised, “It would be more candid … to avow our principles explicitly to Russia and France, than to come in as a cock-boat in the wake of the British man-of-war.”

Monroe accepted Adams’s advice. Not only must Latin America be left alone, he warned, but also Russia must not encroach southward on the Pacific coast. “. . . the American continents,” he stated, “by the free and independent condition which they have assumed and maintain, are henceforth not to be considered as subjects for future colonization by any European Power.” Some 20 years after Monroe died in 1831, this became known as the Monroe Doctrine.