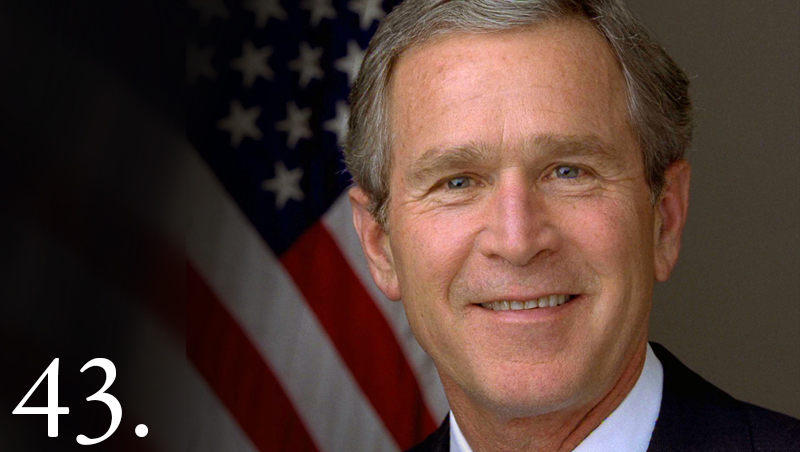 The airborne terrorist attacks on the World Trade Center, the Pentagon, and the thwarted flight against the White House or Capitol on September 11, 2001, in which nearly 3,000 Americans were killed, transformed George W. Bush into a wartime president. The attacks put on hold many of Bush’s hopes and plans, and Bush’s father, George Bush, the 41st president, declared that his son “faced the greatest challenge of any president since Abraham Lincoln.”

In response, Bush formed a new cabinet-level Department of Homeland Security, sent American forces into Afghanistan to break up the Taliban, a movement under Osama bin Laden that trained financed and exported terrorist teams. The Taliban was successfully disrupted but Bin Laden was not captured and was still on the loose as Bush began his second term. Following the attacks, the president also recast the nation’s intelligence gathering and analysis services, and ordered reform of the military forces to meet the new enemy. At the same time he delivered major tax cuts which had been a campaign pledge. His most controversial act was the invasion of Iraq on the belief that Iraqi President Saddam Hussein posed a grave threat to the United States. Saddam was captured, but the disruption of Iraq and the killing of American servicemen and friendly Iraqis by insurgents became the challenge of Bush’s government as he began his second term. President Bush pledged during his 2005 State of the Union Address that the United States would help the Iraqi people establish a fully democratic government because the victory of freedom in Iraq would strengthen a new ally in the war on terror, bring hope to a troubled region, and lift a threat from the lives of future generations.

Bush was born in New Haven, Connecticut while his father was attending Yale University after service in World War II. The family moved to Midland, Texas, where the senior Bush entered the oil exploration business. The son spent formative years there, attended Midland public schools, and formed friendships that stayed with him into the White House. Bush graduated from Yale, received a business degree from Harvard, and then returned to Midland where he too got into the oil business. In Midland he met and married Laura Welch, a teacher and librarian. They had twin daughters, Jenna and Barbara, now out of college and pursuing careers.

When George W. Bush, at the age of 54, became the 43rd president of the United States, it was only the second time in American history that a president’s son went on to the White House. John Quincy Adams, elected the sixth president in 1824, was the son of John Adams, the second president. While John Adams had groomed his son to be president, George Bush, the 41st president, insisted he was surprised when the eldest of his six children became interested in politics, became governor of Texas, and then went on to the White House.

During the early part of the 2000 campaign for the White House, Bush enjoyed a double-digit lead in the polls over his opponent Vice President Al Gore Jr. But the gap closed as the election approached and though Gore finally won the popular vote by 543,895 votes, victory or loss of the presidency hinged on Florida’s electoral votes. That struggle through recounts and lawsuits worked its way to the Supreme Court. In the end Bush won the electoral count 271 to 266. His new administration was focused on “compassionate conservatism,” which embraced excellence in education, tax relief and volunteerism among faith-based and community organizations.

Bush was challenged in his re-election bid in 2004 by Massachusetts Democratic Senator John Kerry. The election was a good contest, but Bush’s contention that the invasion of Iraq had made the world more secure against terrorism won the national political debate. Bush was re-elected with 51 percent to 48 percent.

On the inaugural stand, George W. Bush set the theme for his second term: “At this second gathering, our duties are defined not by the words I use, but by the history we have seen together. For half a century, America defended our own freedom by standing watch on distant borders. After the shipwreck of communism came years of relative quiet- and then there came a day of fire. There is only one force of history that can break the reign of hatred and resentment, and expose the pretensions of tyrants, and reward the hopes of the decent and tolerant, and that is the force of human freedom – tested but not weary… we are ready for the greatest achievements in the history of freedom.”