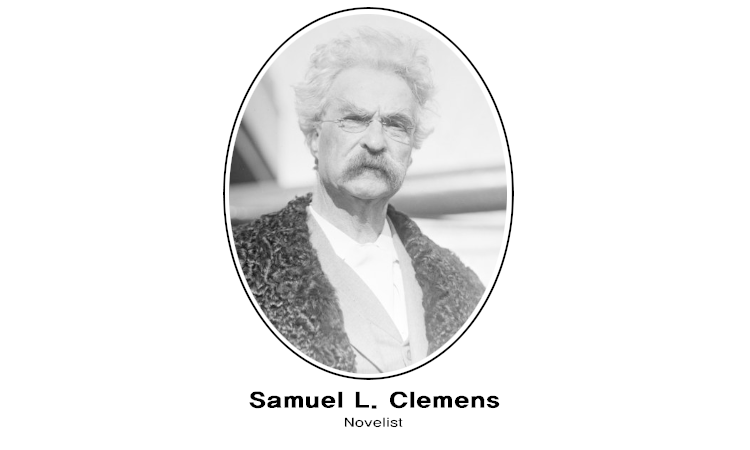 In The Adventures of Huckleberry Finn, a runaway teenager named Huck Finn went floating down the Mississippi River on a raft with an escaped slave named Jim, and with them, Mark Twain’s reputation as one of the finest American novelists was confirmed.

Samuel Langhorne Clemens, known to the world by his pen name of Mark Twain, was born on November 30, 1835, in Florida, Missouri. Twain is best known for his novels set in his boyhood world on the Mississippi River. The Adventures of Tom Sawyer, published in 1876, and The Adventures of Huckleberry Finn, published in 1884, are considered classics today. These books not only told a good story; they also included African Americans who were admired by whites for their strength of character.

As a young man, Clemens worked as a typesetter for his brother Orion’s newspaper, before he followed his dream and went to pilot paddlewheel steamboats on the Mississippi River. He worked on boats for three years until the outbreak of the Civil War stopped river traffic in 1861.

After that he went to Nevada where Orion had been appointed Secretary of the Territory. He wrote an account of his journey called Roughing It, which was published in 1872. While in the West, he stayed at a boarding house of a fellow Missourian, Mrs. Lee Summer Whipple-Haslam. When other boarders, thinking Clemens was “wonderful,” asked if there were others like him in Missouri, she answered “no,” saying “he was a Missouri freak that had broken loose from his hitching post.”

After some time in Nevada, where he worked as a reporter for the Virginia City newspaper Territorial Enterprise and adopted the pen name of Mark Twain, Clemens moved to San Francisco. It was there that he began to establish a nationwide reputation as a humorist. His wry sense of humor is well known and took many forms.

In 1890, he wrote a letter to Gardiner G. Hubbard, addressed to “The Father-in-law of the Telephone.” In it he complained to Alexander Graham Bell’s father-in-law about the poor telephone service he received in Hartford, Connecticut, objecting that there was no night service and that he was regularly cut off while practicing his cursing!

Twain is also known for his comments about life and human nature, such as this one, “To succeed in life, you need two things: ignorance and confidence.”