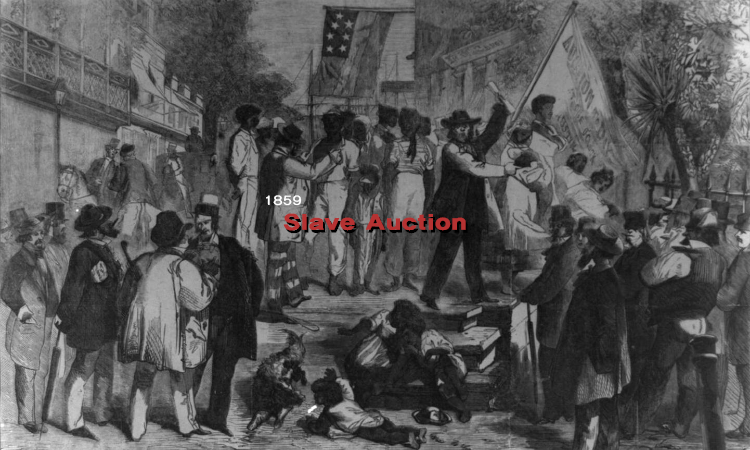 In spite of having inherited two plantations, Pierce M. Butler owed a great deal of money. Over two days, Butler auctioned off the human portion of his property to help pay off his debts. It was the largest sale of slaves on record in the United States, and it was referred to as “The Weeping Time.”

The 436 men, women, children, and infants, all of whom had been born on his plantations, were brought to a racetrack in Savannah, Georgia, and put in the stalls used for horses. There they waited, some for days, others for weeks, for the auction to begin on March 3, 1859.

The sale had been advertised for several weeks. Every hotel in Savannah was filled with potential buyers. In the days before the auction, potential buyers went to the racetrack to look over the people for sale. The slaves were humiliated when the buyers pulled open their mouths to see their teeth and they pinched their arms and legs to check for muscle strength. The slaves said nothing, unless they hoped to be bought by the person examining them. They knew they were to be sold in families, but “family” was defined as husband and wife, mother and young child, not brother or sister or parent. Some tried to convince prospective buyers to purchase their entire family.

On the first day of the auction, the slaves were brought to a long room called the “Grand Stand.” Pierce Butler walked among his people, speaking to them and shaking the hands of his favorite servants. Fierce rains kept many of the potential buyers away and the auction began two hours late.

The auctioneer, Mr. Walsh, stood on a platform and began the sale. The first sold were George and Sue, along with their two boys, George and Harry, for $600 each. Eventually, all 436 people were purchased away from friends and family, and from the only home they had known. All of their hearts broke with the knowledge that they would never see each other again. For many of them, “The Weeping Time” would last a lifetime.