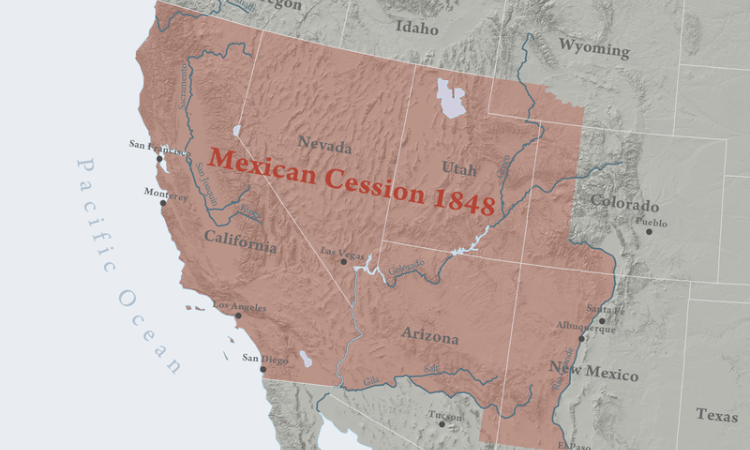 “There shall be firm and universal peace between the United States of America and the Mexican Republic, and between their respective Countries, territories, cities, towns and people, without exception of places or persons.” — Treaty of Guadalupe Hidalgo, 1848

Did you know that a large portion of the Western United States used to be a part of Mexico? On February 2, 1848, U.S. and Mexican officials met in Mexico City to sign the Treaty of Guadalupe Hidalgo. The agreement brought an end to the Mexican War after nearly two years and extended the U.S. west to the Pacific Ocean with 525,000 square miles of former Mexican territory. The new American territory included present-day Arizona, California, western Colorado, Nevada, New Mexico, Texas and Utah. Along with the 1853 Gadsden Purchase, this treaty completed the expansion of the United States to 48 states. Do you know what events led to the signing of the treaty?

The Mexican War began with a dispute over the addition of Texas to the United States, since both Mexico and the U.S. claimed the area between the Nueces and Rio Grande rivers as their own. In January 1846, President James K. Polk ordered General Zachary Taylor to bring troops into the disputed area. When Mexican troops attacked Taylor’s forces, Congress approved a declaration of war on Mexico on May 13, 1846. With the capture of Mexico City by General Winfield Scott on September 14, 1847, the fighting subsided.

The soldiers in the Mexican War, mostly in their late teens and early 20s, suffered from the intense heat, dust, insects, poor rations, low wages, and disease, which perhaps killed more soldiers than bullets. Mexican soldiers also encountered poor treatment by officers, who were from a wealthy class, while most enlisted men were peasants.

In contrast, U.S. General Zachary Taylor, called “Old Rough and Ready” by the American soldiers, was much more considerate of his troops. He often wore a straw hat with his uniform, looking more like an old farmer than a general. Winfield Scott was nicknamed “Old Fuss and Feathers” for his neat and tidy uniform and strict ways. Both officers led the way to victory, setting the scene for the Treaty of Guadalupe Hidalgo.