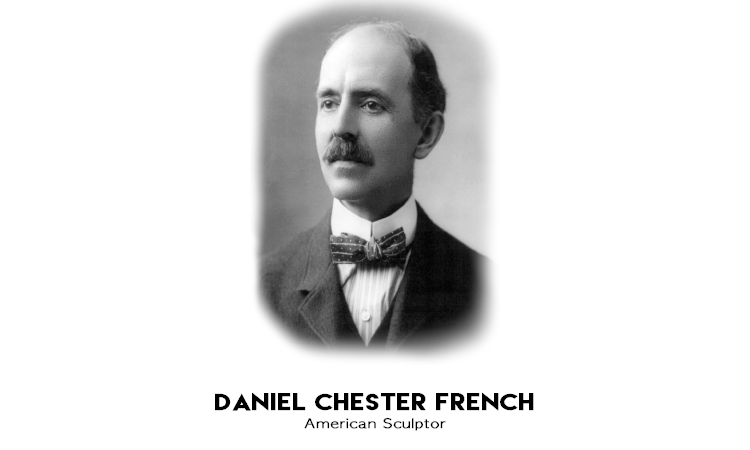 Even if you have not visited the Lincoln Memorial in Washington, D.C., you’ve probably seen pictures of the colossal statue of Abraham Lincoln sitting in a chair in the center of the memorial. American sculptor Daniel Chester French created that famous statue of Lincoln. Born in Exeter, New Hampshire, on April 20, 1850, French made many other monumental statues too.

Brought up in Cambridge and Concord, Massachusetts, French met fellow Concord resident Louisa May Alcott (author of Little Women), who encouraged young French to pursue a career as an artist. He studied in Boston and New York before receiving his first commission for the 1875 statue The Minute Man. It stands on the “green” in Concord, Massachusetts, to commemorate the battle of Lexington and Concord during the Revolutionary War. A famous symbol of America, images of The Minute Man appeared on defense bonds, stamps, and posters during World War II.
French’s statue, The Minute Man, in honor of the reserve soldiers from the Revolutionary War who were ready to fight at a minute’s notice

The Angel of Death and the Sculptor, a sculptured relief by Daniel Chester French
After studying art in Europe, French returned to Washington, D.C., where he opened his own studio. There, he created more ambitious work such as the impressive General Lewis Cass for the U.S. Capitol in 1888. By the turn of the 20th century, French was America’s leading monumental sculptor. Next time you see the statue in the Lincoln Memorial or The Minute Man, you’ll know who created those famous American artworks. Share your new knowledge with your family.