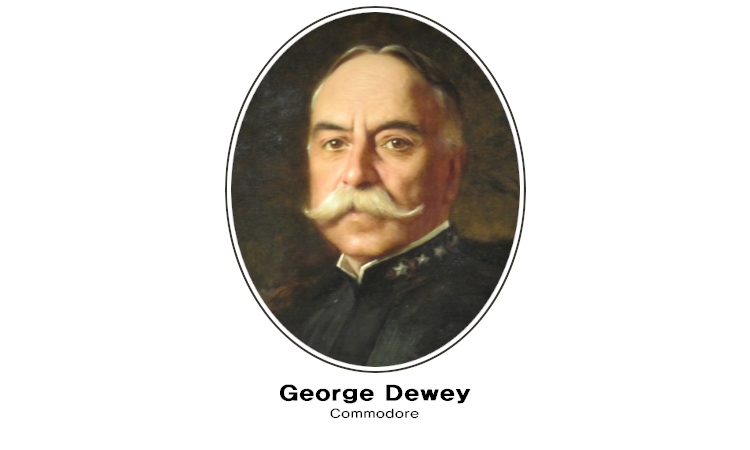 Do you have a hero? Many Americans around 1900 called the naval commander of the Spanish-American War, Commodore George Dewey, a hero. Born on December 26, 1837, the brave sea captain inspired great admiration when he went to battle with the Spanish fleet in the Pacific. Departing for the Philippines on April 25, 1898, the day the U.S. declared war on Spain, he was well prepared for the fight. Just before 6 a.m., on the morning of May 1, 1898, Commodore George Dewey commenced the Battle of Manila Bay, uttering the famous command: “You may fire when ready, Gridley.”

Within six hours, Dewey’s squadron of six ships, including the flagship U.S.S. Olympia with Captain Gridley at the helm, had sunk every ship in the Spanish fleet. There were few casualties and no loss of lives on the American side. On August 13, 1898, U.S. troops occupied Manila, bringing the United States closer to an ultimate victory in the Spanish-American War. Dewey brought the U.S. recognition as a major naval power. The acquisition of the Philippines gave the United States a strong presence in the Pacific. Commodore Dewey became a national hero.

With parades on water and land, Dewey fans celebrated with wild enthusiasm when he made his triumphant homecoming in 1899. How do you describe your hero? In one flowery tribute at a reception put on for Admiral and Mrs. Dewey, an admirer declared, “From out of the din and smoke of battle there arose a colossal figure, calm and majestic, cool and self-reliant . . . a naval hero, the splendor and brilliancy of whose achievement have written on the eternal tablet of fame.” The speaker, Josiah T. Settle, also described the New York homecoming as an “unlimited display of loyal affection . . . greater than was ever shown before to any other man.” Do you feel this way about your hero?