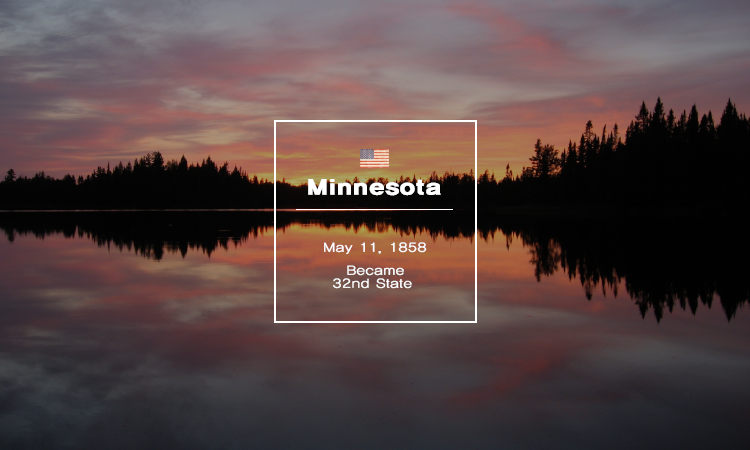 Known as the “Land of 10,000 Lakes,” Minnesota became the 32nd state in the Union on May 11, 1858. What makes this state important? For one, its waterways are vital to the state’s and the nation’s economies. Besides its quantity of lakes, it is the northernmost stop of the Mississippi River and the westernmost point of the St. Lawrence Seaway, which runs through the Great Lakes to the Atlantic Ocean.

Despite the convenient access to the state, immigration was slow until the second half of the 19th century, when people in the east started to hear about Minnesota’s woodlands and fertile prairie. Between 1850 and 1857, the state population skyrocketed from 6,077 to more than 150,000. Long before that, the Ojibwa (Chippewa) and Dakota (Sioux) tribes made the land their home. For them state borders were nonexistent, so their territory extended well beyond what is today Minnesota. The French claimed the territory in the mid-1600s. It became U.S. territory through the Treaty of Paris (1783) and the Louisiana Purchase (1803).

Minnesota today is still a leader in farming, lumbering, and milling, as well as printing and iron production. Have you visited Minnesota? What do you know about its twin cities, Minneapolis and St. Paul? Ask your family and friends what they know about Minnesota, the “Land of 10,000 Lakes.”