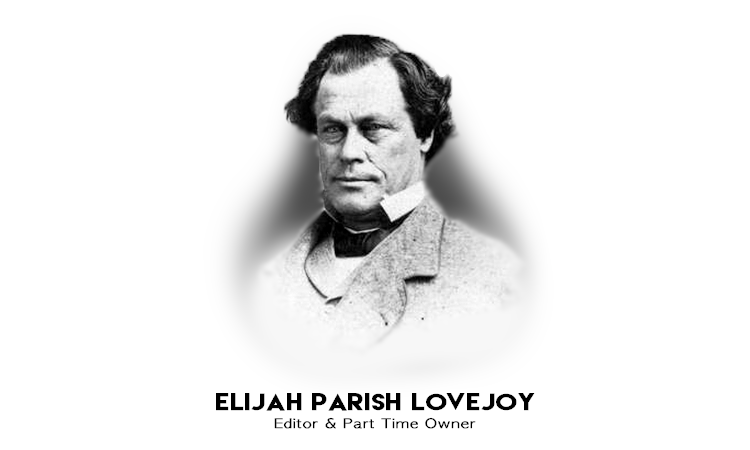 November 7, 1837
Elijah Parish Lovejoy was Killed by a Pro-Slavery Mob

On November 7, 1837, Elijah Parish Lovejoy was killed by a pro-slavery mob while defending the site of his anti-slavery newspaper, The Saint Louis Observer. His death deeply affected many Northerners and greatly strengthened the abolitionist (anti-slavery) cause. Who was Lovejoy and why did his death cause such a strong reaction around the country?

Lovejoy, born in 1802, in Albion, Maine, sought his fortune in the Midwest after his college graduation. Over time, he became editor and part-owner of The St. Louis Times.

In 1831, caught up in the powerful religious revival movement sweeping the U.S., Lovejoy sold his business and went back East to study religion. There, a group of St. Louis businessmen recruited Lovejoy to return to St. Louis as editor of a new paper, The Saint Louis Observer, designed to promote religious and moral education. Supported by abolitionist friends such as Edward Beecher (the brother of Harriet Beecher Stowe, author of Uncle Tom’s Cabin), he wrote anti-slavery editorials. Over time, Lovejoy’s writing against slavery and in support of abolition became more strongly worded.

By 1837, Lovejoy called for immediate universal emancipation (complete freedom from slavery). While national circulation of the paper increased, locals who supported slavery became angry. Mob violence increased over the slavery issue, several times destroying Lovejoy’s presses. As a husband and father, Lovejoy feared for his family’s safety, so they moved to Alton, in the free state of Illinois, hoping to cool the fires. When a new press arrived in November 1837, violence escalated.