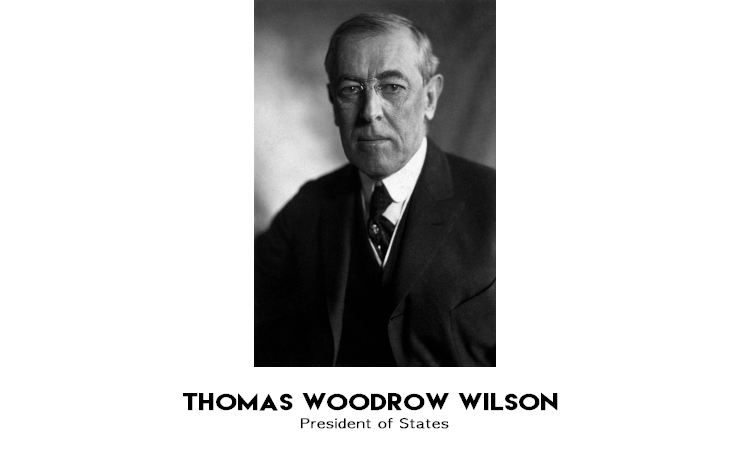 “He is one of the great presidents of American history,” said Rabbi Stephen A. Wise of Woodrow Wilson. Born on December 28, 1856, in Staunton, Virginia, Thomas Woodrow Wilson started his career as a university professor. He went on to serve as president of Princeton University and then as governor of New Jersey in 1910. Two years later, he ran for president on the Democratic ticket and won. Wilson became the 28th president of the United States, serving two consecutive terms in the White House, from 1913 to 1921. During his time in office, Wilson faced many challenges at home and abroad, and face them he did.

The issue of women’s suffrage (right to vote) confronted Wilson right from the start. The National Women’s Party organized a suffrage parade in Washington, D.C., the day before Wilson’s inauguration. Drawing away the crowds from inaugural events, leaders hoped to put pressure on the new president to pay attention to women’s rights. It is said that when Wilson arrived in town he found the streets empty, instead of full with welcoming crowds, and was told that everyone was on Pennsylvania Avenue watching the parade. Before the end of his second term in 1920, Wilson and Congress approved the 19th Amendment, giving women the right to vote.

In foreign policy, Wilson faced a greater challenge than any president since Abraham Lincoln. Deciding whether or not to involve the U.S. in World War I severely tested his leadership. Initially reluctant to send soldiers overseas, Wilson met increased pressure. On April 6, 1917, the United States went to war with Germany. Less than a year later, on January 8, 1918, Wilson made his famous “Fourteen Points” address, introducing the idea of a League of Nations. The purpose of the international organization was to preserve peace. Wilson promoted his plan tirelessly, as U.S. troops contributed to an earlier than expected cease-fire in 1918.

For his efforts, Wilson was awarded the 1919 Nobel Peace Prize, but the award was bittersweet. Congress opposed U.S. entry into the League. The strain of his campaigning and the disappointment of Congress’s resolution weakened him. He returned to Washington in a state of collapse and shortly suffered a thrombosis (a blood clot in a blood vessel) that impaired control over the left side of his body. Wilson and his second wife, Edith Bolling Galt Wilson–who continued work in the White House when Wilson was ill–retired in Washington, D.C., in 1921. Wilson died three years later, and he is memorialized in many ways, including this 1918 footage of the president in a New York parade encouraging Americans to participate in Liberty Loans to support the war effort. Take a look.