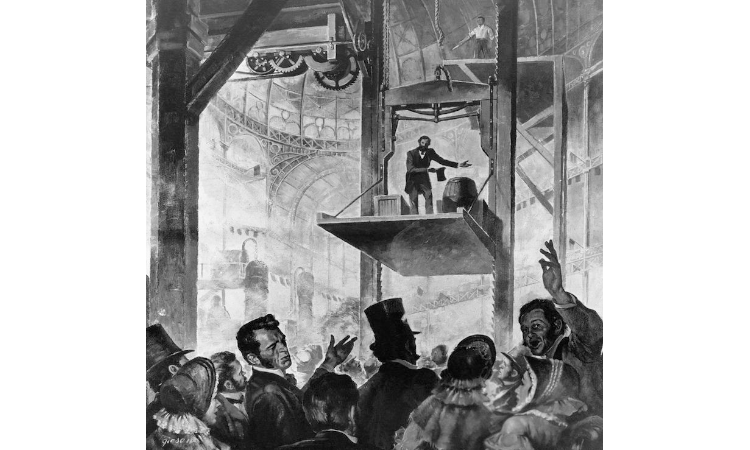 Skyscrapers could not have been built without Elisha Graves Otis’s invention. Any guesses as to what that was? Otis opened a small factory on the banks of the Hudson River in Yonkers, New York, on September 20, 1853, to make elevators, fully equipped with his newly invented automatic safety device. Having received an order for two freight elevators with the new device, Otis abandoned his plans to join the California Gold Rush. But after six months, he hadn’t received a second order. What do you think he did?

Otis staged a public demonstration. He climbed on top of his elevator in New York’s Crystal Palace exhibition, and while hoisted to the ceiling, ordered the rope cut. Seeing how his safety brake kept him from falling, people realized the importance of his invention. Though in 1856, Otis’s sales totaled just 27 elevators, his performance launched the passenger elevator industry. The world’s first safety elevator for passengers, installed in 1857 in a New York store, rose at a speed of 40 feet per minute. How does that compare to today’s elevators?