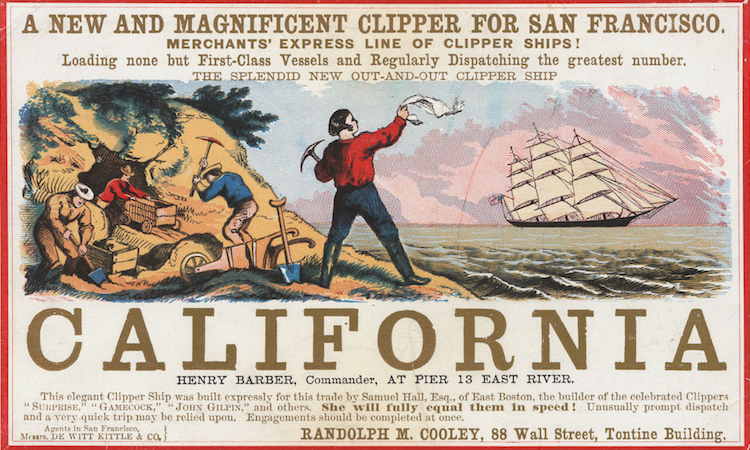 Did you ever wonder what it would have been like to head for California during the Gold Rush? In 1849, after the announcement that gold was discovered at Sutter’s Mill, thousands of people, called forty-niners, traveled to California by sea. Thousands more traveled across land. They were lured by the prospect of finding gold and riches. Yankee trader Franklin A. Buck was among those who headed west to seek his fortune. Just 20 years old, Buck left his job in New York and set sail for California in January 1849. On November 25, 1849, he wrote a letter to his sister Mary about his experiences in the boomtown of Sacramento City. Buck opened a supply store there and business boomed like the town!

Though homesick, the young forty-niner wrote to his sister, “I have not come 20,000 miles to turn around and go right back again like some persons who have been here and gotten homesick.” Young Buck told Mary about the success of his business. “Week before last,” he boasted, “we sold out of our little store $1,500 worth of goods. All cash trade in one day. Tell Joseph to beat that . . . The flour that I bought in San Francisco for $18 per sack (200 lbs) we sold for $44 and are all out.” Among those seeking gold in California in 1849, many went home again penniless. But merchants, like Buck, who provided supplies for the miners, tended to do well in the golden West.

Buck described for Mary the growing town of Sacramento City, consisting of “more than 800 framed buildings, besides the tents.” The California weather, he told her, was great. “Today is Sunday. Gloomy November, probably, with you, but here the weather is splendid, not cold enough to need a fire.” Despite his enthusiasm, Buck could not conceal his homesickness, and how he missed his family. “I should like to be at home on Thanksgiving Day. I suppose you have had or will have one about this time. (Bake me a turnover!) Be sure and write me all about it. I look forward with great pleasure to spending a Thanksgiving with all the family once more in my life.” Have you ever felt homesick? If you were a forty-niner, would you have felt like Franklin Buck?