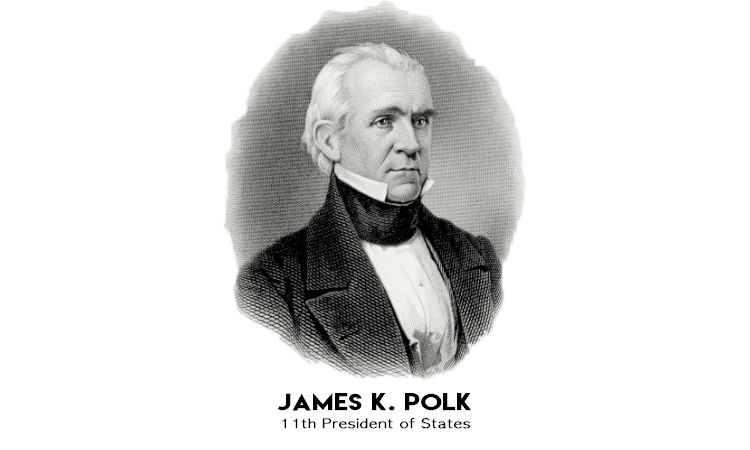 When James K. Polk accepted the Democratic Party’s nomination for the presidency, he was not very well known. The Whig opposition party played on his obscurity, sniping, “Who is James K. Polk?” An experienced speaker, Polk surprised everyone when he campaigned vigorously and won the presidency on November 5, 1844. He was called a “dark horse” candidate because he was not expected to beat his opponent, Henry Clay of the Whig Party, to become the 11th president of the United States.

Winning by a narrow margin, Polk campaigned on his strong support for westward expansion, a hotly debated issue that was dodged by other candidates. After taking office, Polk acted swiftly to fulfill his campaign promises, as he intended to serve only one term. In four years, he oversaw the addition of Texas, the reestablishment of an independent treasury system, and the acquisition of territory from Mexico. This new land from Mexico eventually became California, New Mexico, Arizona, Utah, and parts of Colorado and Wyoming. This new land came just in time for the discovery of gold in California in 1848.

But Polk’s considerable political accomplishments took their toll on his health. Full of enthusiasm and vigor when he entered office, Polk left the White House at the age of 53, exhausted. He died less than four months later at his new home, “Polk Place,” in Nashville, Tennessee, the state he had served as governor. Polk’s wife, Sarah Childress Polk, lived there another 42 years, hosting many visitors. During the Civil War, she welcomed both Union and Confederate leaders. “Polk Place” became a pilgrimage destination and was respected as neutral ground, even during the bloody Battle of Nashville. James and Sarah Polk left an important legacy to a greatly expanded United States.