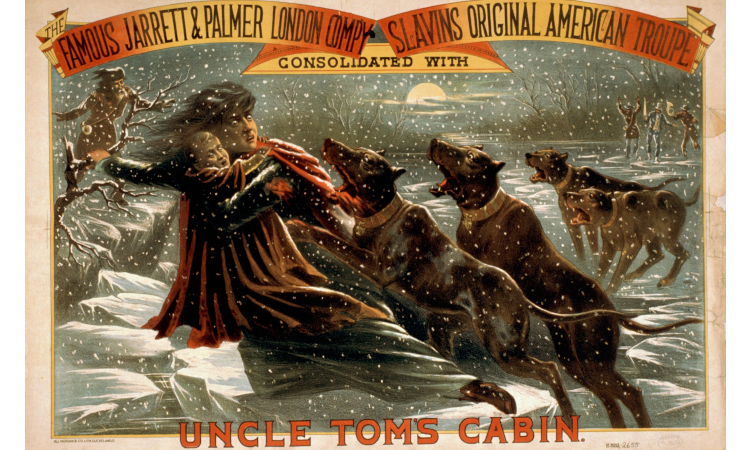 Have you read the book Uncle Tom’s Cabin? Besides being a good read, this influential book is often included in lists of “causes of the Civil War” (1861-65). It has been translated into at least 23 languages, and has been presented on stage and in film. Harriet Beecher Stowe’s story first appeared on June 5, 1851, in serial form, a chapter at a time, in a weekly publication called the National Era. It went on to become one of the nation’s earliest bestsellers.

Harriet Beecher Stowe cared deeply about human rights. Her family was active in the Underground Railroad, helping slaves escape to freedom in the North. (The Underground Railroad was a system formed by a group of people who were against slavery. These people helped escaped slaves secretly reach the North.) For 18 years she observed a slave-holding community in Kentucky just across the Ohio River from where she lived in Cincinnati. She didn’t like what she saw.

Stowe decided to write a fictional story about slavery and sent it to the editor of an anti-slavery weekly. He paid her $300 for the right to publish her story, and on June 5, 1851, the first chapter appeared in print. Over the next 10 months, Uncle Tom’s Cabin, or Life Among the Lowly, was published in 40 installments. People started to discuss Uncle Tom’s Cabin and pass around the story. In 1852, a Boston publisher issued Uncle Tom’s Cabin as a book. It became an instant bestseller. Three hundred thousand copies were sold the first year, and about two million copies were sold by 1857. Before long it seemed that everyone had read it, including the president of the United States!

President Lincoln invited Harriet Beecher Stowe to the White House in 1862. According to legend, he is said to have exclaimed, “So this is the little lady who made this big war?” Because the book divided people into those who wished to abolish slavery (abolitionists) and those who wished to maintain slavery (anti-abolitionists), it is often listed as one of the causes of the Civil War. Would you say that the pen is mightier than the sword?

Uncle Tom’s Cabin was often produced as a play, so that many people who did not read the book saw it as a powerful stage drama. Although, especially at first, white actors usually played the African American parts in blackface, some productions starred African-American actors and singers. At least seven silent-film versions of Uncle Tom’s Cabin had been made by 1927. The 1970 film version stars African-American actress Eartha Kitt.

The book, with its memorable characters, remains powerful today. Pick up a copy and read Uncle Tom’s Cabin for yourself.