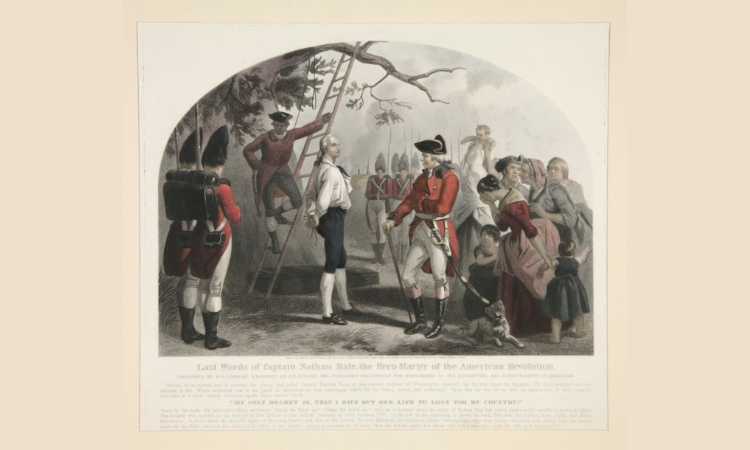 “I only regret that I have but one life to lose for my country.” Have you heard this famous declaration before? American patriot Nathan Hale said it on September 22, 1776, his last words before he was hanged for spying on British troops. How did this come to pass? Hale, born in Coventry, Connecticut, on June 6, 1755, and a teacher by trade, joined his five brothers in the fight for independence against the British.

Five of Nathan Hale’s brothers fought the British at Lexington and Concord, Massachusetts, on April 19, 1775. Nathan joined them on July 1. From there, he quickly rose to the rank of captain in the military. He fought under General George Washington in New York, as British General William Howe began a military build-up on Long Island. Washington took his army onto Manhattan Island. At the battle of Harlem Heights, Washington, facing Howe in battle yet again, asked for a volunteer to go on a spy mission behind enemy lines. Hale stepped forward.

Disguised as a Dutch schoolmaster, Nathan Hale set out on his mission on September 10. For a week he gathered information on the position of British troops, but was captured while returning to the American side. Because of incriminating papers Hale possessed, the British knew he was a spy. It is said that his cousin, a British sympathizer under Howe’s command, betrayed him. Howe ordered young Hale to be hanged the following day. That’s when Hale, who gave his life for his country, said those famous words.