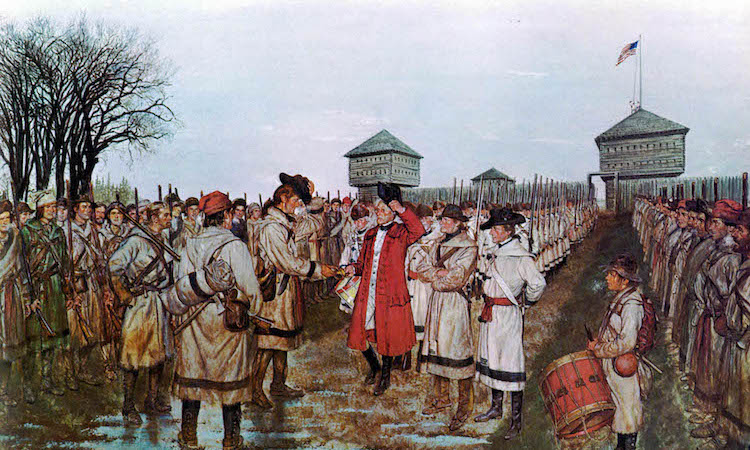 Before the Revolutionary War, hundreds of colonists and their families settled beyond the Appalachian Mountains and beyond the protection of the Colonies. When the war began, the settlers became vulnerable to attack not only from the Native Americans but also from the British.

Clark discovered that Hamilton was strengthening his defenses at Fort Sackville at Vincennes, Indiana. To capture the fort, Clark needed to attack soon. He could rely on his men’s expert marksmanship, but with only 200 buckskin-clad pioneers under his command, he needed a plan.

Clark arrived in Vincennes on February 23, 1779. He ordered his men to march all the company’s flags back and forth behind a bluff in sight of the fort. Hamilton, thinking he was overwhelmed by a company of 600 men instead of 200, thought he should surrender. He requested that Clark meet with him at a nearby church on February 24 to discuss terms. On the morning of February 25, Hamilton surrendered. He was imprisoned at Williamsburg, and the British never regained control of the fort. An American flag was raised above the fort and cannon shots were fired in celebration.