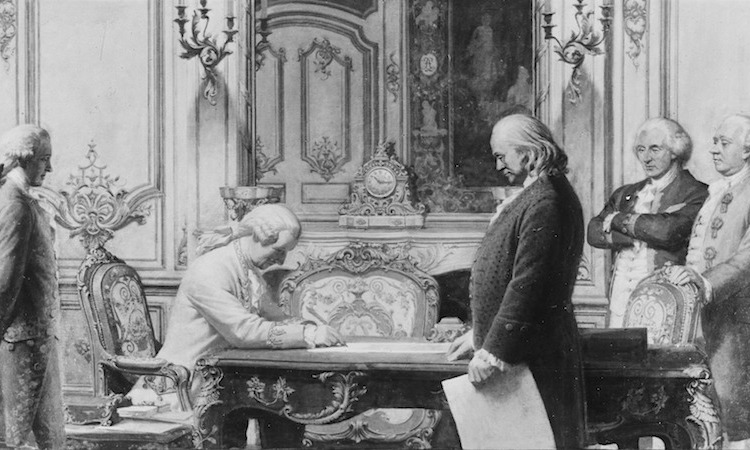 Friends, and in French, amis! On February 6, 1778, Benjamin Franklin was in France signing the Treaty of Amity and Commerce and the Treaty of Alliance. The Treaty of Amity and Commerce recognized the U.S. as an independent nation and promoted trade between France and America. The second agreement, the Treaty of Alliance, made the fledgling United States and France allies against Great Britain in the Revolutionary War. The French decided to back the U.S. in its military efforts until the U.S. had full independence from Great Britain. After that, the treaty required France and the U.S. to work together on any peace agreement. Did you know the French helped the U.S. to win the Revolutionary War?

France had been secretly aiding the American Colonies since 1776, because France was angry at Britain over the loss of Colonial territory in the French and Indian War. In 1776, the Continental Congress sent diplomat Benjamin Franklin, along with Silas Deane and Arthur Lee, to France to secure a formal alliance. When Franklin came to the signing ceremony, he wore, as a symbol, the same brown velvet suit he had worn when he appeared before Britain’s Privy Council in 1774. At the time, he was accused of theft for having brought to light British documents that showed the British were purposefully repressing the Colonies.

France aided the colonists by providing military armaments and loans. France’s support deepened after the Americans beat the British in the October 1777 Battle of Saratoga, proving themselves committed to independence and worthy of a formal alliance. King Louis XVI approved financial assistance to the American colonists only four days after Franklin and his comrades requested it.

During the Revolution, France sent an estimated 12,000 soldiers and 32,000 sailors to the American war effort, the most famous of whom was the Marquis of Lafayette. He became a good friend (ami) with American commander in chief George Washington in the process.