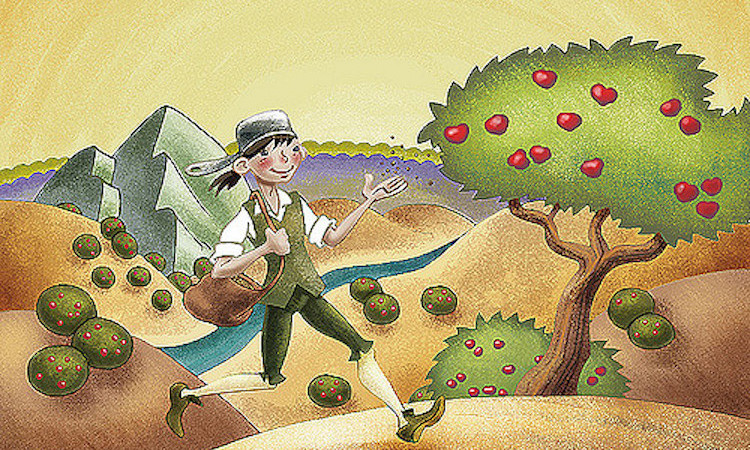 You’ve probably heard about the legendary “Johnny Appleseed” who, according to story and song, spread his apple seeds all over the nation. Did you know there really was a “Johnny Appleseed”? His name was Jonathan Chapman. Born in Massachusetts on September 26, 1775, Chapman earned his nickname because he planted small orchards and individual apple trees during his travels as he walked across 100,000 square miles of Midwestern wilderness and prairie. He was a genuine and dedicated professional nurseryman.

In 1801, Chapman transported 16 bushels of apple seeds from western Pennsylvania down the Ohio River. He had acquired more than 1,000 acres of farmland on which he developed apple orchards and nurseries. But he didn’t just stay there. Chapman’s work resembled that of a missionary. Each year, he traveled hundreds of miles on foot wearing a coffee sack with holes cut out for arms and carrying a cooking pot, which he is said to have worn like a cap over his flowing hair.

About 1830, Chapman also acquired land in Fort Wayne, Indiana. There, he planted a nursery that produced thousands of seedling apple trees that he sold, traded, and planted elsewhere. It’s no wonder he became a legendary figure with his cheerful, generous nature, his love of the wilderness, his gentleness with animals, his devotion to the Bible, his knowledge of medicinal herbs, his harmony with the Indians, and above all, his eccentric appearance. Fort Wayne still celebrates the life of “Johnny Appleseed” with a festival every September when apples are harvested. Next time you bite into an apple, think of the man who spread wealth through apples, Jonathan Chapman, better known as “Johnny Appleseed.”