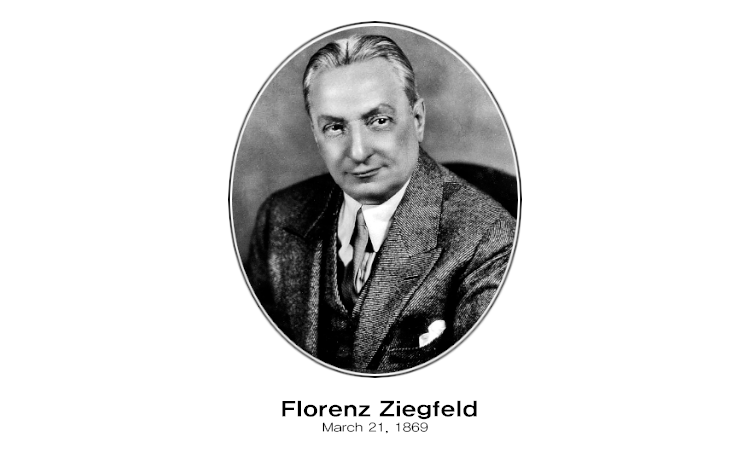 For laughs and entertainment back in the early 20th century, where would you have gone? Before there were movies, there was vaudeville–popular live stage entertainment featuring comedy, song, and dance. Perhaps you would have enjoyed the more chic look of the Ziegfeld Follies in 1907, known for its chorus of beautiful women in extravagant costumes. Its creator, the legendary showman Florenz Ziegfeld Jr., was born on March 21, 1869, in Chicago, Illinois. Before these famous beauties, Ziegfeld presented a beauty of a different kind, a bodybuilder named the Great Sandow.

The Great Sandow, a 23-year old muscle man, performed with only moderate success in New York, until Ziegfeld became his manager. He whisked the young man off to the World’s Columbian Exposition (a world’s fair) in 1893 and created a sensation by inviting members of Chicago’s high society backstage to touch Sandow’s mighty muscles. Revenues soared. Ziegfeld’s great triumph, the Follies, came soon after.

A charming French-born actress named Anna Held suggested the idea for the Ziegfeld Follies. Ziegfeld married Anna Held in 1897, and she inspired him to create a musical revue like the ones she had seen in Paris, featuring pretty chorus girls, chic costumes, and comedy. Why not? American girls were “the most beautiful girls in the world,” she said. In New York, Ziegfeld produced the first of the spectacular Follies, the Follies of 1907, starring–who other than?–Anna Held. It was a hit! The popular Follies continued, updated each year until the Great Depression. Here’s a hit from the Follies of 1913.

Anna Held became one of the first big “stars,” of the era, thanks to Ziegfeld’s great publicity. Ziegfeld went on to create other stars like Will Rogers and, in 1927, produced the musical Show Boat. Some of the traditions of Ziegfeld and the vaudeville era are still alive in theater today. Have you seen or been in a musical revue or a musical? Ask your family if they have heard of the Ziegfeld Follies. They might enjoy listening with you to this tune from The Follies of 1922.