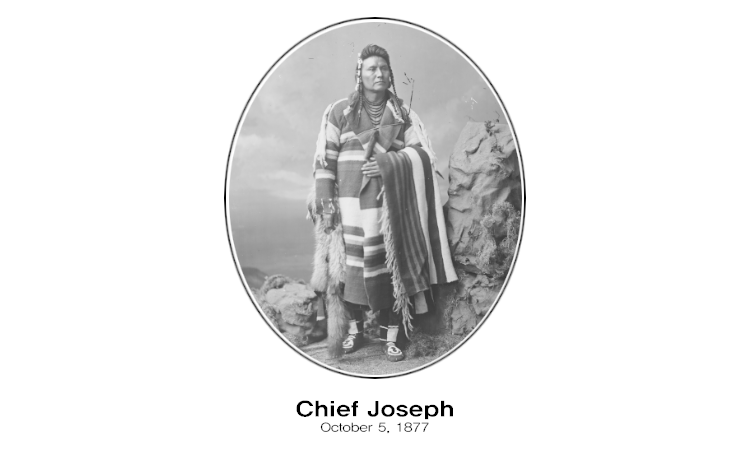 Chief Joseph loved his homeland, his people, and peace, but he was tired of running from the U.S. Army. “Hear me, my chiefs! I am tired. My heart is sick and sad. From where the sun now stands, I will fight no more forever.” On October 5, 1877, Chief Joseph spoke these words during his surrender in the Bear Paw Mountains of Montana. After a harrowing journey of more than 1,000 miles across Oregon, Washington, Idaho, and Montana, pursued by the federal army, he and his followers surrendered to the troops. They were 40 miles from the Canadian border and freedom.

Believing in peace, Chief Joseph had been trying to secure his homeland for his tribe, the Nez Perce, without fighting. To Chief Joseph and his tribe, their homeland was sacred, like a cathedral. At first, the government allowed them to stay in their home regions, then some years later, forced them out. As they began their journey from their ancestral home in the Wallowa Valley of Oregon to a reservation in Idaho, the chief learned that three young Nez Perce men, enraged at their loss, had committed a brutal act.

The three young Indians had massacred a band of white settlers. Chief Joseph feared retaliation by the government and tried to take his people to safety. After their capture, the Nez Perce were moved to Kansas, but the fearless leader never gave up. He went to Washington D.C. to meet with the president. Finally, in 1885, Chief Joseph and his followers were allowed to return to the Pacific Northwest, close to their old home, thanks to the persistence and courage of Chief Joseph. His Indian name reflected his strength: Thunder Rolling Down the Mountain.