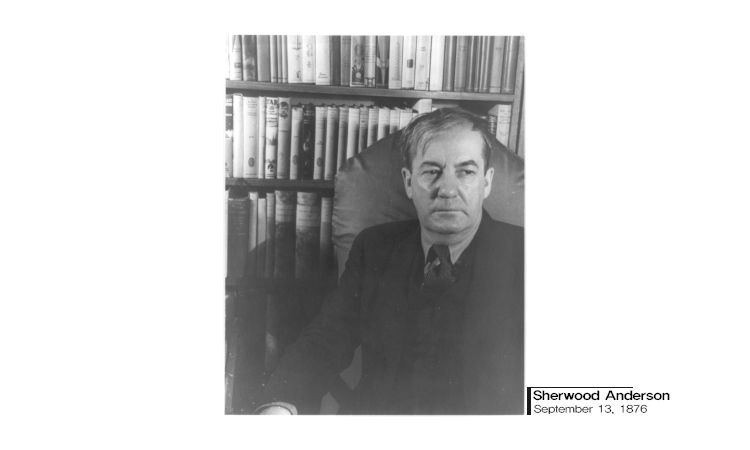 Have you ever written a story about your hometown? Maybe you think it’s too “boring” to write about. If so, take a look at American writer Sherwood Anderson. Born on September 13, 1876, in Camden, Ohio, he is best known for his short stories that reflect his small-town, Midwestern past. Described as “brooding Midwest tales,” they reveal “their author’s sympathetic insight into the thwarted lives of ordinary people.” This third child of a harness maker and sometime house painter had a fondness for storytelling.

As a young man, Anderson was intent on establishing his financial independence. He married, had three children and worked, with growing dissatisfaction, in the corporate world until 1909, when he suffered a brief nervous breakdown. He began to write fiction that year while working as a copywriter at a Chicago advertising agency. In Chicago, he met other thriving writers such as Carl Sandburg and Theodore Dreiser, who formed a sort of Chicago literary renaissance. Many of them, like Anderson, had grown up in small Midwestern towns.

Sherwood Anderson had an important influence upon American writing between World War I and World War II. He is credited with capturing the real sound of everyday speech in his writing and experimenting with new forms and styles, breaking down tired, old formulas. He influenced a whole generation of writers, most notably Ernest Hemingway and William Faulkner. Many experienced writers have stressed that a young writer should write about what he or she knows best. While in New Orleans in 1924, Anderson encouraged Faulkner to write about his home county in Mississippi. Anderson’s 1919 collection of short stories, Winesburg, Ohio, is widely considered his best work. Try writing a story about your hometown; you may be surprised.