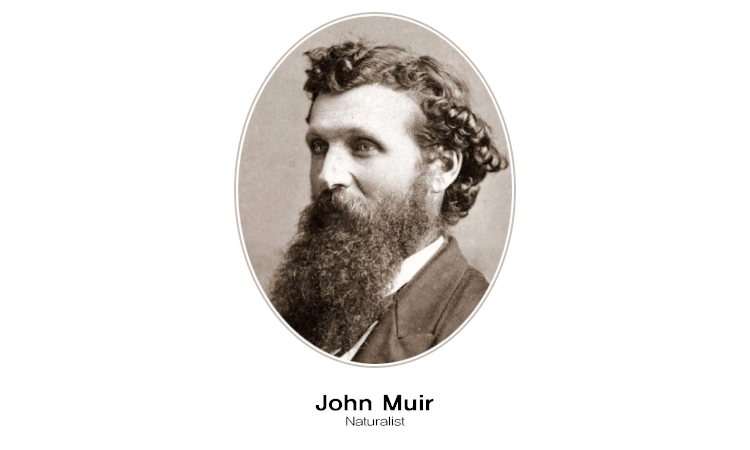 What’s the first thing you see when you wake up? What would you see if you slept outside? Would you wake up when the sun rises? For John Muir, a naturalist who traveled the country and observed his surroundings, sleeping outside was one of life’s great pleasures. He kept track of his experiences by recording them in a journal. Here’s what he wrote on July 19, 1869, when he woke up in the Sierra Nevada Mountains of California:

“Watching the daybreak and sunrise. The pale rose and purple sky changing softly to daffodil yellow and white, sunbeams pouring through the passes between the peaks and over the Yosemite domes, making their edges burn; the silver firs in the middle ground catching the glow on their spiry tops, and our camp grove fills and thrills with the glorious light.”

From the start, Muir was an early defender of the environment. In 1876 he supported the adoption of a federal forest conservation program. From 1892 to 1914 he was the Sierra Club’s first president. The Sierra Club is an environmental organization. His articles and books describing Yosemite’s natural wonders inspired public support for establishment of Yosemite National Park in 1890 and expansion of the park in 1905. Next time you visit a park, take a good look around. How do you think someone who was seeing it for the first time would feel? How would you describe it?