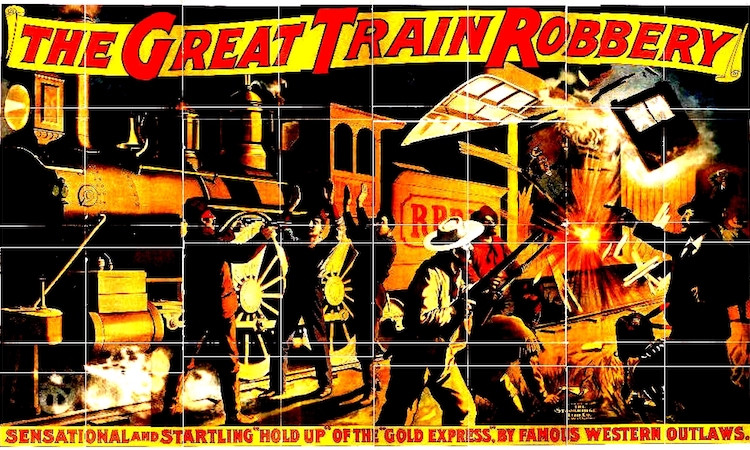 On October 6, 1866, one of the first train robberies in America took place when the Reno brothers boarded an eastbound train in Indiana wearing masks and toting guns. After emptying one safe and tossing the other out the window, the robbers jumped off the train and made an easy getaway.

A wave of train robberies followed the Reno brothers’ startling hold-up. Within two weeks, two trains were derailed and their safes were robbed. During another robbery in Indiana, an expressman aboard the train was thrown out the window before safes were emptied of $40,000.

Train robberies reached a peak in 1870, and robbers tended to stick to certain territories. The Reno brothers operated in southern Indiana. The Farringtons terrorized trains in Kentucky and Tennessee, and the infamous Jesse James gang wreaked havoc along the rails in the Midwestern states.

One witness to a train robbery in the late 1880s described the experience this way: “I decided to come home Thanksgiving to be with my family at Silver City. I boarded the train at Wilcox. There was a large shipment of gold on the train. Just out of Steins Pass we could see a large bon-fire. One of the train-men remarked, ‘Wonder what the big fire is. I hope we don’t run into any trouble.’ …Then, as today, curiosity got the best of some of us so we had to find out why the train came to an abrupt stop, and why the bon-fire was put on the track. We found ourselves looking into the barrel of guns.”

Private detectives placed onboard trains, along with soldiers and other lawmen were brought in to protect the trains. By the turn of the 20th century, most of the famous train robbers, including Butch Cassidy, the Sundance Kid and the other members of the Wild Bunch gang, had been captured, killed or were no longer operating in the United States.