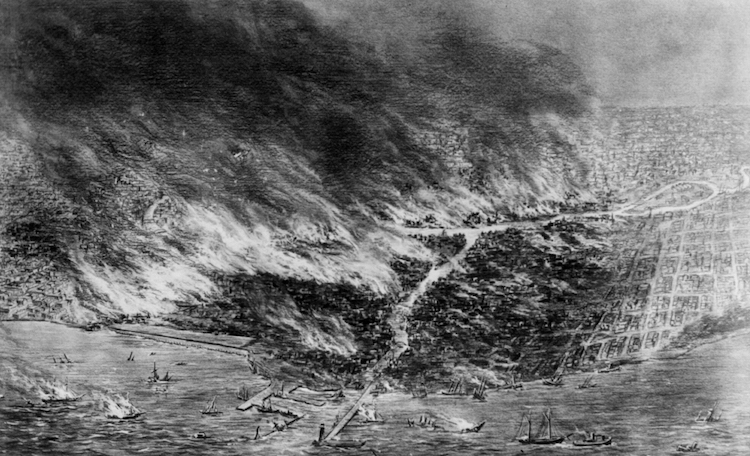 If you woke up and your house was on fire, what would you take with you before getting out? You might be surprised at some of the things you might grab in the middle of the night.

On October 8, 1871, a huge fire started near Chicago’s downtown area and burned four square miles to the ground before it was extinguished. The blaze burned homes and shops and left 300 people dead and 500,000 people homeless. As the fire spread, people ran out of their homes, taking with them whatever they could grab. One woman carried a big frame that held her wedding veil, while another carried a pot of soup!

Can you imagine how a cow could set such a huge fire? No one is sure how the Chicago blaze began, but one eyewitness saw the first flames leaping out of Mr. And Mrs. O’Leary’s barn. Rumor, and now legend, has it that their cow kicked over an oil lamp, setting straw on fire. Mrs. O’Leary’s cow may well be the most infamous cow in American history!

Firefighters brought the fire under control the next day, on October 9, 1871, but only with the help of a rainstorm. It had been unusually warm and dry that year, and the city’s wood buildings burned like matches until finally the rain came down.

One Chicago resident described jumping out of bed as the fire approached. “Everybody in the house was trying to save as much as possible. I tied my clothes in a sheet. With my clothes under my arm and my pack on my back, I left the house with the rest of the family. Everybody was running north. People were carrying all kinds of crazy things . . . cats, dogs and goats. In the great excitement people saved worthless things and left behind good things.” It’s easy to panic and not think clearly in a fire. Most possessions can be replaced, so it is very important to leave a burning building as quickly as possible.