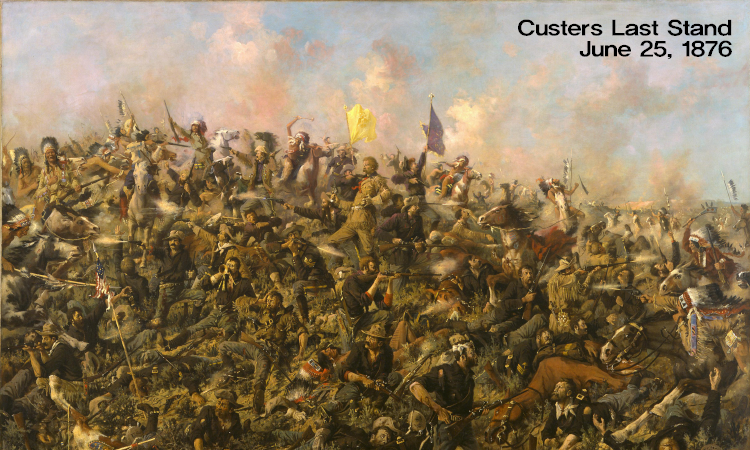 What do you know about the Battle of Little Big Horn? You might know the story better as Custer’s Last Stand.

On the morning of June 25, 1876, Lieutenant Colonel George A. Custer and the 7th Cavalry charged into battle against Lakota Sioux and Northern Cheyenne Indians. Custer’s orders were to wait for reinforcements at the mouth of the Little Big Horn River before attacking the Indians, but Chief Sitting Bull had been spotted nearby, and Custer was impatient to attack.

A treaty had given the Sioux exclusive rights to the Black Hills, but when gold was later discovered in the area, white miners flocked to the territory. Despite the treaty, the U.S. government ordered the Indians away from the invading settlers and back to their reservations.

Custer’s job was to force the Indians back to their reservations. Some of the Indians refused to leave their sacred land, and other hunters were camped in remote places and never learned of the order. The U.S. Army prepared for battle anyway.

Custer planned to attack the Indian camp from three sides, but Chief Sitting Bull was ready for them. The first two groups, led by Captain Benteen and Major Reno, were immediately forced to retreat to one side of the river, where they continued to fight as best they could. Custer was not as lucky.

Custer’s troops charged the Indians from the north. Quickly encircled by their enemy, Custer and more than 200 of his soldiers were killed in less than an hour. The Indians retreated two days later when the troops Custer had been ordered to wait for arrived.

The Battle of Little Big Horn was a short-lived victory for the Native Americans. Federal troops soon poured into the Black Hills. While many Native Americans surrendered, Sitting Bull escaped to Canada.