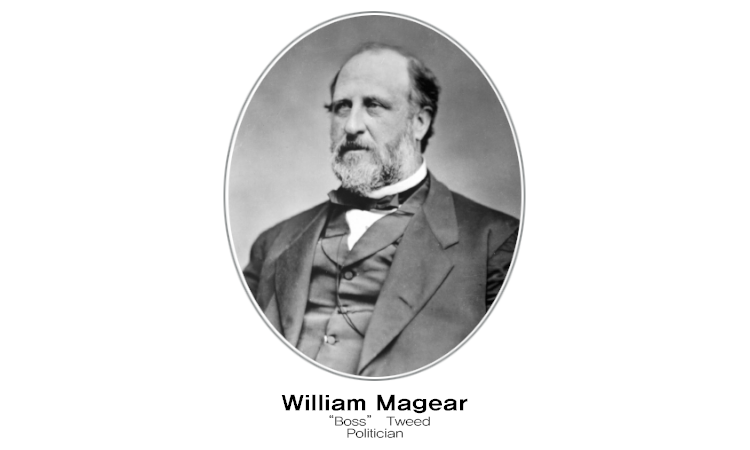 On December 4, 1875, William Marcy Tweed, better known as Boss Tweed, escaped from prison and fled to Europe. How he landed in prison in the first place is a story of American politics and corruption.

Tweed started out as a bookkeeper and volunteer fireman in New York City. He was elected alderman (a member of a city’s legislative body) in 1851, and later he was also elected to a term in Congress. By 1870, he was so powerful and had so many of his friends (known as his “Tweed Ring” cronies) in political positions that he was able to pass a new city charter allowing him and his friends to control the city treasury. Between 1865 and 1871, Tweed and his associates stole between $30 million and $200 million from the city.

The “Tweed Ring” managed to steal the money by faking leases, padding bills with false changes and paying for unnecessary repairs and overpriced goods and services bought from suppliers controlled by the ring. A growing movement was determined to expose and overthrow Tweed, led by George Jones, the publisher of The New York Times, and reform lawyer Samuel J. Tilden. Cartoonist Thomas Nast also helped spark public outrage against Tweed by creating wicked caricatures of him in Harper’s Weekly magazine.

Tweed unsuccessfully attempted to bribe both Nast and Jones to leave him alone, but on November 19, 1873, Tweed was tried and convicted on charges of forgery and larceny. He was released in January 1875, but was immediately rearrested. The state sued him for $6 million, and he was held in a debtor’s jail until he could come up with half that amount for bail. In the debtor’s prison, he was allowed daily trips, accompanied by the jailer, to see his family. On one of these trips, in December 1875, he escaped and fled to Spain. He was a fugitive there for a year, working as a common seaman on a Spanish ship until he was recognized by his likeness to a Nast cartoon and captured. He died in a debtor’s prison on April 12, 1878.