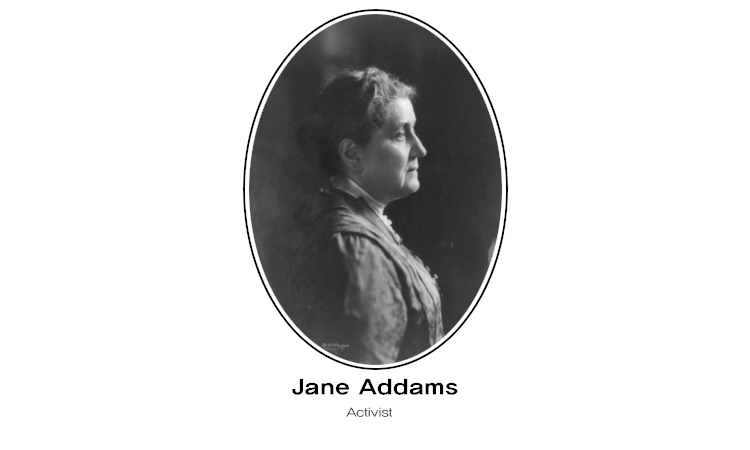 As a young woman, Jane Addams did not know what she wanted to do with her life. Born September 6, 1860, in Cedarville, Illinois, Addams grew up in an era when women were expected to marry and raise children. Addams knew she wanted to do something different.

She found the inspiration that would lead her to fight for the rights of children, help the poor, and become the first American woman to receive the Nobel Peace Prize.

After recovering from an illness, Addams went on a tour of Europe in 1883-85 and 1887-88. She and her traveling companion, Ellen Gates Starr, discovered Toynbee Hall in London, the world’s first settlement house, which is an institution that provides community services. Toynbee helped the poor by providing them with social services. Hoping to do the same for poor immigrants in Chicago, Addams and Starr returned to Illinois and purchased the former Hull mansion in Chicago.

At first, Hull House opened a kindergarten and provided assistance to needy families, but so much more was needed. What could two people do to tackle the enormous problems brought on by poverty?

At the center’s first Christmas party, Addams was surprised when several little girls refused the candy she offered them. The girls, she discovered, worked long hours in a candy factory. Soon, Addams, Starr, and others at Hull House worked toward establishing child labor laws. They also fought for equal rights for women and in international peace.

Today, Hull House continues to build on Addams’s work. Jane Addams found her inspiration from London’s Toynbee Hall. Where will you discover your life’s inspiration?