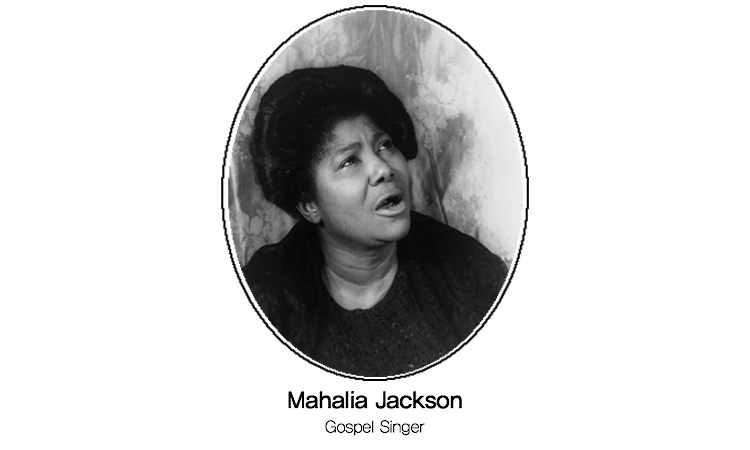 Mahalia Jackson spent a lifetime singing the sacred songs that she loved. “The Queen of Gospel Song” was born on October 26, 1911, in New Orleans, Louisiana. Jackson grew up singing gospel at the Plymouth Rock Baptist Church, where her father was a preacher. At 16, she moved to Chicago, as many African Americans did around that time, and supported herself doing housekeeping and odd jobs. But she never stopped singing.

In Chicago, Jackson joined the Greater Salem Baptist Church and began touring with a gospel quintet. Jackson only sang gospel, refusing to sing secular (non-religious) music, because, she said, “When you sing gospel you have a feeling there is a cure for what’s wrong.” She made her first solo recordings in the mid-1930s and eventually signed with Columbia Records in 1954. Jackson collaborated with the “Father of Gospel Music,” Thomas Dorsey. She recorded with jazz great Duke Ellington, packed Carnegie Hall in New York City on a number of occasions, had a radio show, and sang for four presidents. Besides being a great singer, she was a highly successful businesswoman.

With the power of her music, Mahalia Jackson participated in the civil rights movement and became a prominent figure in the struggle. Jackson has influenced many singers of today, such as Aretha Franklin. Martin Luther King Jr. said of her, “A voice like this comes, not once in a century, but once in a millennium.” Ask your parents and grandparents if they have heard the gospel songs of Mahalia Jackson. Have you ever heard gospel music?