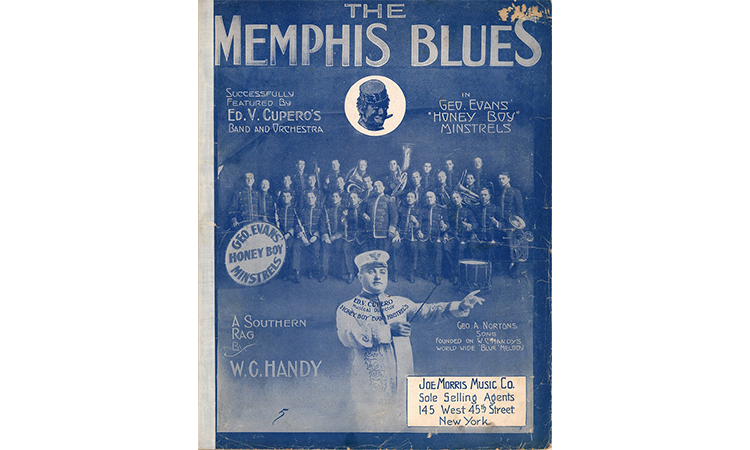 Do you listen to the blues? If you haven’t, you’ve definitely heard music influenced by the blues (a song of sadness in which the second line often repeats the words of the first). Artists such as John Lee Hooker, B.B. King, and Koko Taylor have made that sultry blues sound legendary, but before them, William Christopher Handy, the “Father of the Blues,” brought the African-American folk tradition into mainstream music. The publication of his song “The Memphis Blues” on September 28, 1912, changed the course of American popular song.
By the 1960s, the blues sound had significantly influenced the development of jazz, classical music, and the rock and roll of such performers as Aretha Franklin and the Rolling Stones. Do the blues influence any of your favorite songs?

Born in Alabama in 1873, W.C. Handy found his true calling when he began playing cornet with dance bands traveling the Mississippi Delta. Along the road, Handy wrote down and collected blues songs he heard in the 1890s. Audiences, however, wanted to hear ragtime dance tunes, the lively and popular music of the day, so that’s what he played. When he settled in Memphis, Tennessee, in 1909, Handy found a sophisticated population with a limitless appetite for music. Music was so popular in Memphis that an aspiring mayor, E.H. Crump, hired Handy as the bandleader for his campaign.

Handy’s original tune, titled “Mr. Crump,” merged the blues sound with popular ragtime style. Overwhelmingly popular, the song led Crump to the mayor’s office and Handy to musical success. Changing the song’s name to “The Memphis Blues,” he watched the sheet music go on sale in department stores on September 28, 1912. The first thousand copies sold out in just three days. But Handy’s publisher deceived him and told him that the song had flopped, offering him just $50 to buy the rights. The composer agreed. Though cheated out of his first big hit, Handy went on to produce many other popular works, such as the “Yellow Dog Rag.” W.C. Handy became recognized around the world as the “Father of the Blues.” What other blues musicians do you know?