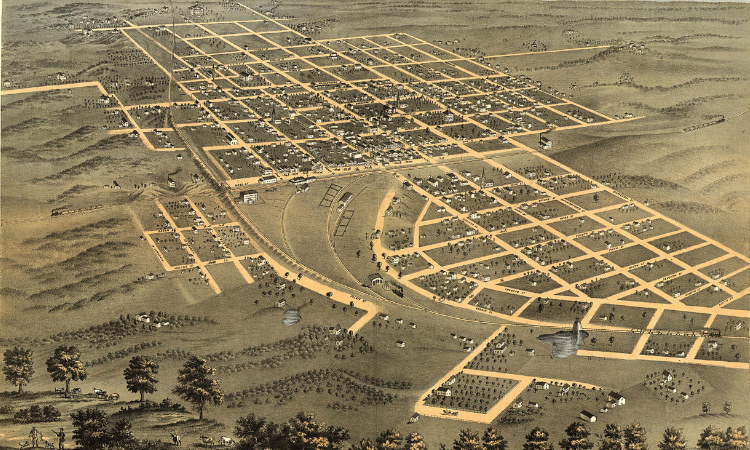 Have you ever tried to find your way around a strange town without a good map? In the 19th century with the United States expanding to the West, mapping new territories was extremely important. As cities grew and spread across the nation, a different kind of map–the panoramic map–became necessary and popular.

Pioneering panoramic-map artist Albert Ruger died on November 12, 1899, in Akron, Ohio. During his lifetime, Ruger helped develop this new form of cartography (mapmaking), producing maps of towns and cities in 22 states from New Hampshire to Minnesota, and as far south as Alabama. What is a panoramic map?

Panoramic maps were also called “bird’s-eye-view maps” because towns and cities were drawn as if viewed from above at a slanted angle, much like a bird might see from a half mile away as it flew by the town. Panoramic cartographers didn’t worry so much about the exact scale of their drawings; they concentrated instead on illustrating street patterns, individual buildings, and major landscape features in perspective. This map of Guttenberg, Iowa, is a good example.

Ruger formed Merchants Lithographing Company with a partner in the late 1860s, producing many of these popular maps. Aerial photographs and earth-orbiting satellite mapping techniques of today have made Ruger’s panoramic map-making techniques somewhat outdated, but his panoramic maps can give us a glimpse into the past of America’s towns and cities.