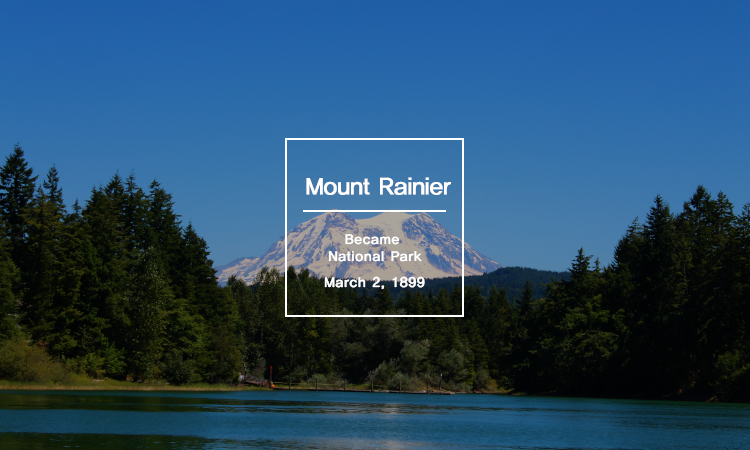 Do you recognize this beautiful natural landmark? This is Mount Rainier in central Washington, a 14,410-foot volcanic peak, surrounded by pristine forests and spectacular alpine scenery. It is also, in a way, a timepiece. It looks very much as it did 200 years ago. On March 2, 1899, President William McKinley signed legislation creating Mount Rainier National Park. It was the fifth national park designated by Congress. Do you know who made the area near the mountain their home 200 years ago?

Generations of Northwest Native Americans made their home at the base of Rainier. They called their mountain Tacoma (or Tahoma) and viewed it as a symbol of power. English explorer George Vancouver saw the huge mountain when he sailed into Puget Sound in 1792. He named it Rainier to honor his friend, Rear Admiral Peter Rainier. The famed naturalist John Muir visited the Rainier region more than a century later. He first recommended that the area be preserved as a park.

Muir was particularly impressed with the magnificent, colorful wildflowers that blanket the mountain during the warm months. The park today encompasses 400 square miles around Mount Rainier, which is actually an active volcano. It was one of the first parks to have nature guides, park rangers, a museum, and designated “roadless areas.” Rich in resources of all kinds, the rocks, glaciers, water, plants, and animals have come to mean so much–beauty, challenge, renewal, and enjoyment. In 1899, 200 people visited Mount Rainier National Park. Today, nearly 2 million visit each year. Would you like to be one of them?