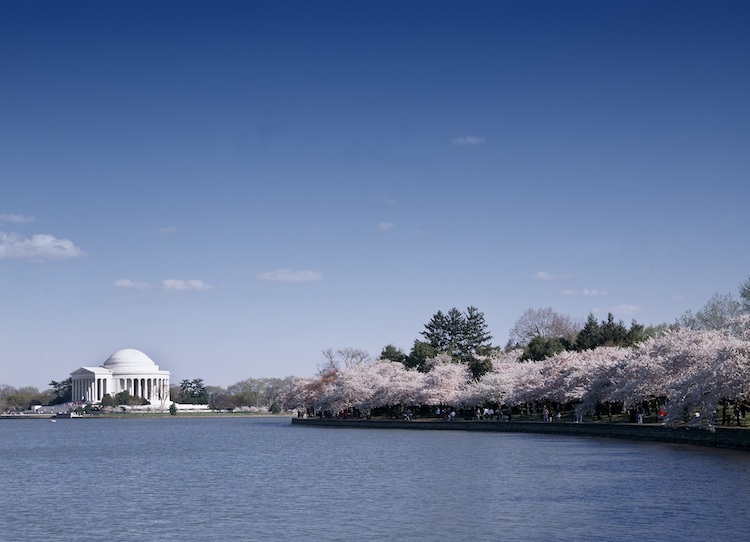 Today, when we think of Washington, D.C., in the springtime, one of the first images that comes to mind is the cherry trees in full bloom. These trees have become one of the most impressive tourist attractions in the city. On March 27, 1912, First Lady Helen Herron Taft and the wife of the Japanese ambassador, Viscountess Chinda, planted two Yoshino cherry trees on the northern bank of the Potomac Tidal Basin in Washington. How many more cherry trees do you think were planted at that time?

When First Lady Taft and the Viscountess Chinda planted those cherry trees, they were only a small part of a gift of 3,020 trees given to the U.S. by the Japanese government. The trees were planted along the Potomac Tidal Basin near the Jefferson Memorial, in East Potomac Park, and on the White House grounds. Why do you think the Japanese gave the cherry trees to the U.S.?

Eliza Ruhamah Scidmore, a travel writer and photographer, had the idea of planting cherry trees in Washington after she returned from a trip to Japan in 1885. She recommended that the city purchase the trees, but the government ignored her request. Finally, in 1909, she decided to raise money and purchase them herself. She wrote to First Lady Helen Herron Taft and told her of her plans. The first lady was enthusiastic about the idea and decided to take up the matter. Once the Japanese consul in New York heard of the first lady’s plans, he suggested that his government make a gift of the trees to the U.S. government.