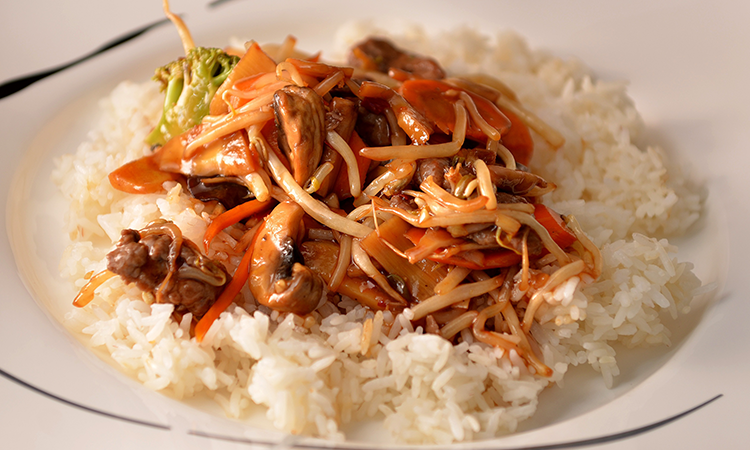 Have you ever eaten chop suey? The origin of this Chinese-American dish is a bit of a mystery. Legend has it that, while he was visiting New York City, Chinese ambassador Li Hung Chang’s cooks invented the dish for his American guests at a dinner on August 29, 1896. Composed of celery, bean sprouts, and meat in a tasty sauce, the dish was supposedly created to satisfy both Chinese and American tastes. The Chinese diplomat was trying to create good relations with the U.S. And you know the old saying, “The way to a person’s heart is through his or her stomach!” But is this legend true?

Whether or not the tale is entirely true, Li Hung Chang definitely influenced the creation of chop suey. When Chang visited the U.S. in August 1896, cheering Americans lined the streets hoping to catch a glimpse of this important visitor and his famous yellow jacket. Children decorated their bicycles with yellow streamers to catch the ambassador’s attention. As the guest of honor at grand feasts and elegant banquets, Chang declined the fancy food and champagne that was offered to him and ate only meals specially prepared by his personal chefs. In reality, chop suey was probably not invented by Li Hung Chang’s chefs, but America’s fascination with this royal visitor from Asia and his team of personal chefs gave rise to new interest in Chinese cooking.

After 1896, Americans began to visit Chinese restaurants in large numbers for the first time. A chop suey fad swept big cities such as New York and San Francisco. Questioning the origins of the chop suey story, scholars suspect restaurant owners used the popular ambassador’s name to inspire interest in a Chinese dish adapted for Americans. Newspaper owners used the same strategy to sell more papers. The New York Journal took advantage of Li Hung Chang’s popularity to claim in an advertising poster, “Li Hung Chang Never Misses the Sunday Journal.” What do you think is the real story behind chop suey?