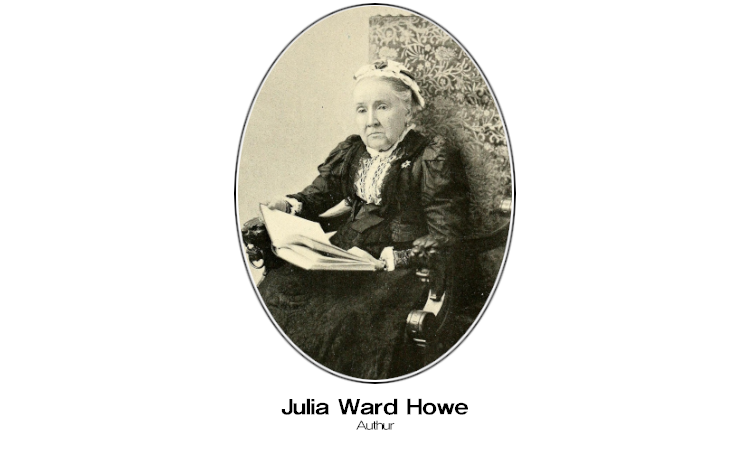 Mine eyes have seen the glory of the coming of the Lord:
He is trampling out the vintage where the grapes of wrath are stored;
He hath loosed the fateful lightnings of His terrible swift sword:
His Truth is marching on.
Glory, glory, hallelujah!

Name that tune’s writer. It’s “The Battle Hymn of the Republic,” written by author and activist Julia Ward Howe. Howe became the first woman elected to the prestigious American Academy of Arts and Letters on January 28, 1908.

Born in New York City in 1819, Howe, and her husband, social activist Samuel Gridley Howe, embraced the abolitionist (freedom from slavery) movement. This dedication, as well as Mr. Howe’s training as a doctor, led to his appointment to the U.S. Sanitary Commission. As a result of Mr. Howe’s work with the Commission, the couple was invited to Washington, D.C., to review the attitudes of Union troops after the First Battle of Bull Run in the Civil War in 1861. Mrs. Howe wrote her “Battle Hymn” soon after, inspired by seeing a real battle.

On November 18, 1861, Howe witnessed a Confederate attack on Union troops in Virginia. She wrote the poem “The Battle Hymn of the Republic,” set to the tune of “John Brown’s Body,” a marching song popular among Union soldiers. It was published in the Atlantic Monthly in 1862, and she received just $5 dollars for the piece. It became very popular in the North, commonly sung at public gatherings. After the war, Howe worked for women’s rights, prison reform, and sex education, fighting battles for causes she believed in until her death in 1910.