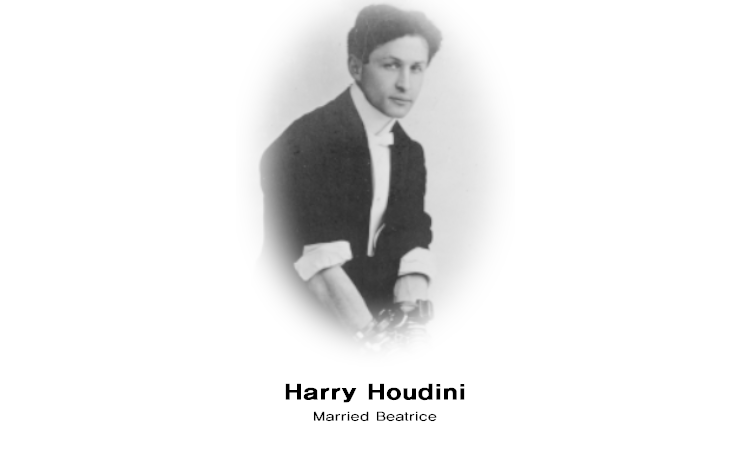 You may have heard about the legendary magician Harry Houdini, but do you know the story of Harry Houdini and the beautiful Beatrice? It was magic at its best when Harry Houdini met Wilhelmina Beatrice Rahner. Harry was an unknown magician and Beatrice was singing and dancing as one of the Floral Sisters in West Brighton Beach, New York. Harry and Beatrice fell in love, and on June 22, 1894, the couple started a new act as husband and wife.

When the Houdinis married, Beatrice left the Floral Sisters and became her husband’s stage assistant. With Beatrice at his side, Houdini advertised he had “escaped out of more handcuffs, manacles, and leg shackles than any other human being living.” Four years later, Houdini the magician made a surprising change in his act. Do you know what it was?

After years as a magician, Houdini dropped his magic act from the show and concentrated on creating fantastic escapes. The couple left the United States and toured Europe, where Houdini was acclaimed as a brilliant “escapologist.”

In 1914, Beatrice and Harry Houdini celebrated their 20th wedding anniversary on board the S.S. Imperator of the Hamburg-America Line, where they met fellow passenger Theodore Roosevelt. Roosevelt was so amazed by Houdini’s performance, he invited Houdini to meet his grandchildren.

Extremely happy for more than 39 years, the Houdinis never attempted escape from the bonds of matrimony. Then, on October 31, 1926, Houdini died from peritonitis (inflammation of the lining of the abdominal cavity) caused from a stomach injury, bringing the story of Harry Houdini and the beautiful Beatrice to a sad and sudden end.