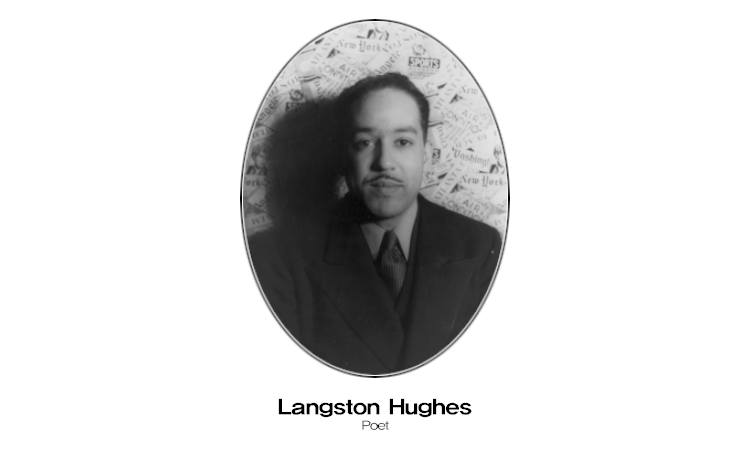 Do members of your family like to tell stories? The tradition of storytelling inspired poet and writer Langston Hughes, who was born in Joplin, Missouri, on February 1, 1902. Hughes spent much of his childhood with his grandmother, who filled his imagination with stories of the past. As a result, Hughes developed a deep interest in African American culture and history that he later wrote into his many stories, autobiographies, histories, and poems.

Hughes wrote the poem “The Negro Speaks of Rivers” the summer after he graduated from high school. It starts like this:

Hughes loved to write and was determined to make his work known. In 1925, while working as a busboy at a hotel in Washington D.C., he slipped three poems into the shoulder bag of guest Vachel Lindsay, who was famous for his performances of poetry. Lindsay liked the poems and as a result, Hughes received a scholarship to Lincoln University in Pennsylvania. There he earned his degree and published collections of poetry and stories. Hughes was part of the Harlem Renaissance, a flourishing of artistic expression by African Americans centered in the community of Harlem in New York City in the 1920s.

In 1941, Hughes wrote the poem “The Ballad of Booker T” about the controversial educator, Booker T. Washington. A freed slave, Washington became a political leader for African Americans in 1881. Some people believe he was too cooperative with the white leaders. Hughes understood Booker’s situation and explained it in the poem:

Sometimes he had
Compromise in his talk-
For a man must crawl
Before he can walk-
And in Alabama in ’85
A joker was lucky
To be alive.

Ask your family if anyone has read poetry or stories by Langston Hughes. And while you’re at it, ask your parents and grandparents to tell some stories about the past. Maybe they will inspire you.