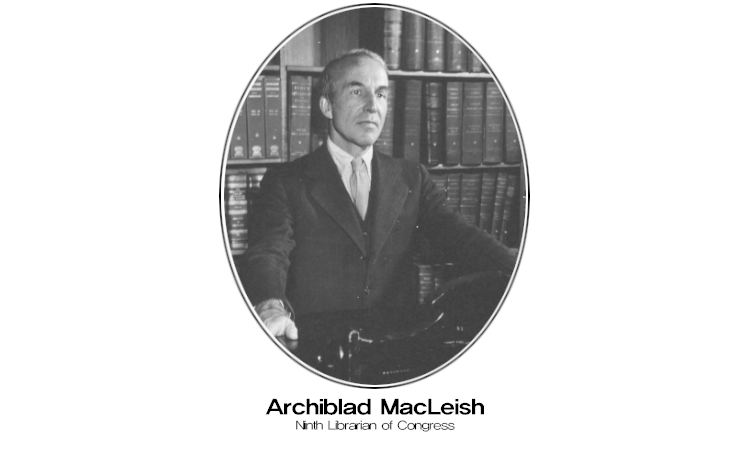 May 7, 1892
Archiblad MacLeish, Ninth Librarian of Congress, was Born

Through this Web site, you have access to all kinds of materials in the Library of Congress, America’s library. It’s huge! You can learn about moments and people in history and actually see documents like Thomas Jefferson’s rough draft of the Declaration of Independence. One man to thank for this is Archibald MacLeish, born on May 7, 1892, in Glencoe, Illinois. Poet, playwright, lawyer, public servant, and lover of books, he served as Librarian of Congress from 1939 to 1944.

While he was Librarian of Congress, MacLeish reorganized the Library and worked to “increase the use of the Library to its readers.” With the start of World War II, he also kept the collection safe by sending important pieces, like the Declaration of Independence, to Fort Knox. He also kept the nation’s Library open to U.S. military intelligence 24 hours a day for the war effort.

MacLeish had other great accomplishments. As a young man, he practiced law for three years, and then he moved his family to Paris, where he wrote several volumes of poetry. Back in the U.S., he wrote a long story-poem called Conquistador about the Spanish conquest of Mexico. For this he won the 1933 Pulitzer Prize for poetry. (The Pulitzer Prize is given annually to poets and writers, as well as to others for achievements in music and journalism.) After his time as Librarian of Congress, he became assistant Secretary of State. In the 1950s, MacLeish wrote more poetry and a play, JB: A Play in Verse, based on the Book of Job in the Bible, which was awarded the 1959 Pulitzer Prize for drama.