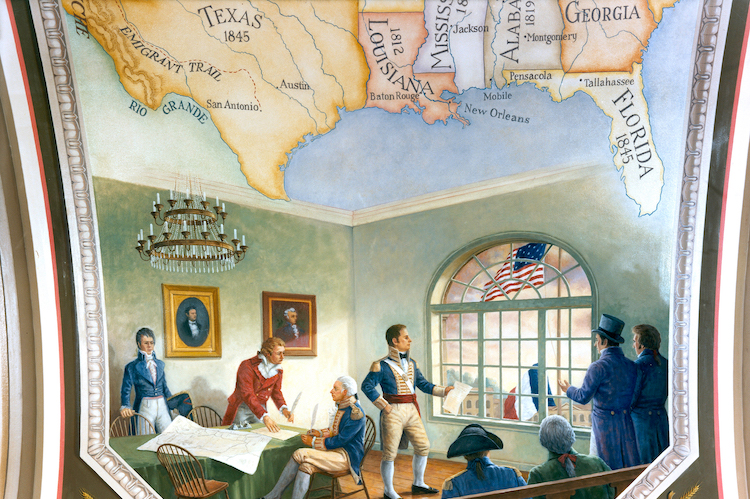 EverGreene Painting Studios Oil on Canvas 1993-1994 The third signing of the Louisiana Treaty, which occurred in New Orleans, is depicted. This official Architect of the Capitol photograph is being made available for educational, scholarly, news or personal purposes.

In the 1800s, in the United States, pioneers and homesteaders eagerly moved west to start a new life in the plains, hills and mountains west of the Mississippi River. This movement could not have happened without the Louisiana Purchase Treaty, approved by the Senate on October 20, 1803, by a vote of 24-to-7. The agreement, which provided for the purchase of the western half of the Mississippi River basin from France at a price of approximately 4 cents per acre, doubled the size of the country.

The United States started negotiating the purchase with France in 1802. President Thomas Jefferson feared that Spain, which had controlled the strategic port of New Orleans since 1762, might give it back to France. Were New Orleans under the control of military dictator Napoleon Bonaparte, Jefferson feared that American settlers living in the Mississippi valley would lose free access to the port. After months of inaction, Napoleon offered to sell the territory to the U.S. in 1803; he needed the money.

Faced with a shortage of cash, a recent military defeat, and the threat of a war with Great Britain and the United States over the territory in question, Napoleon decided to cut his losses. U.S. minister to France Robert Livingston, and James Monroe made the arrangements for the purchase. The land stretched from the Mississippi River to the Rocky Mountains. Twelve days after the signing of the treaty, Meriwether Lewis and William Clark set out to explore and map the new area. Settlers, who had had been pushing westward since the United States’ victory in the Revolutionary War, would now have a vast new expanse of land to homestead.