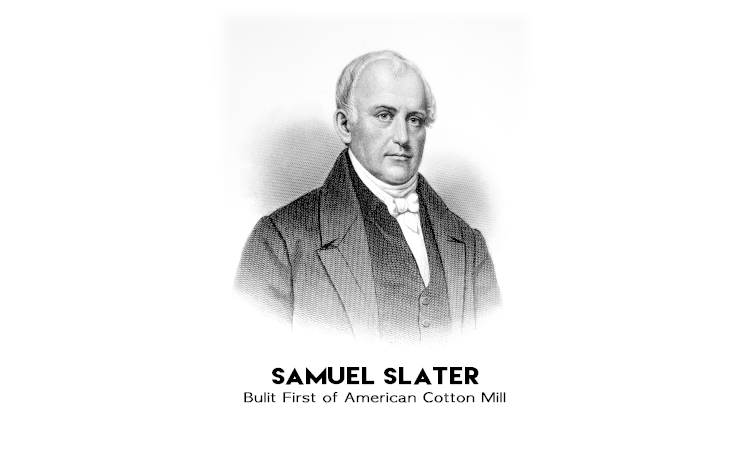 Do you ever look at your clothes and wonder how they were made? How does a cotton T-shirt go from a fluffy little ball of cotton full of seeds to the shirt on your back? A large part of the process happens in a cotton mill. The first American cotton mill began operation on December 20, 1790. The mill in Pawtucket, Rhode Island, had water-powered machinery for carding and spinning cotton. A machine cards cotton by combing and untangling fibers while removing short undesirable fibers. In the spinning process, the fibers are drawn out, twisted and wound to create thread or yarn. That thread can then be dyed and woven into fabrics in the next phase of the process. Can you imagine that all this used to be done by hand before there were machines?

Samuel Slater built that first American mill in Pawtucket based on designs of English inventor Richard Arkwright. Though it was against British law to leave the country if you were a textile worker, Slater fled anyway in order to seek his fortune in America. Considered the father of the United States textile industry, he eventually built several successful cotton mills in New England and established the town of Slatersville, Rhode Island. Before the Civil War, textile manufacture was the most important industry in America and there were rapid advances in mill technology.

The first American power loom was constructed in 1813. This machine weaves thread or yarn into sheets of fabric. Daughters of local farmers often did the spinning and weaving in the mills. In later years, immigrants became mill “hands.” By the 1920s, the South took over textile production from New England. Mills in the South were closer to raw material and offered jobs to Southern laborers desperate for work. Entire families labored together in the textile mills of Georgia and the Carolinas.

Your T-shirt probably left a mill as a sheet of fabric. Next, the material went to a factory to be cut and sewn. It may have been decorated somewhere else before being shipped to a warehouse and then to the store where it was purchased. That’s quite a process for a little fluffy ball of cotton.